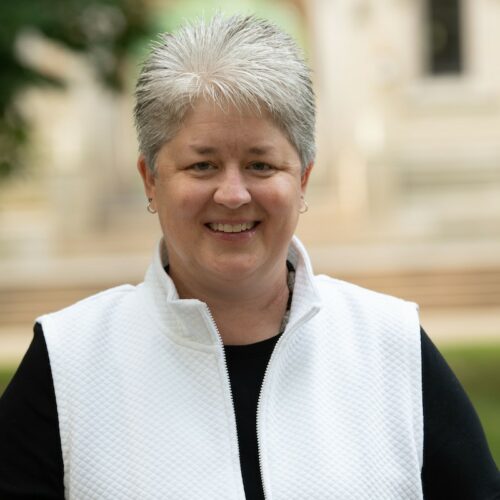 “The Div. III FAR of the Year award is an honor and blessing not only for myself, but also for my family,” shared Judge. “I am grateful and humbled that Keri Alexander Luchowski, North Coast Athletic Conference executive director, nominated me. I share the award with the many people around me who have touched my life with positive energy during my time at Wooster. Former FARs John Ramsay and Alison Schmidt taught me what it meant to be a FAR, and my goal was to always keep that tradition alive with current FAR teammate Drew Pasteur. The award focuses on the service I do that many people have no knowledge of. This service to others has always been at the forefront of my philosophy of what it means to be a community member at a place like Wooster. Through the years, my FAR duties have enriched my professional and personal life by providing a network of trusted friends and meaningful relationships outside my home academic field. Being a FAR has been – without a doubt – one of the highlights of my professional life as a faculty member at Wooster.”

Over the last 18 months, Judge played a leading role in helping Wooster and the NCAC navigate through COVID-19 planning and protocols. The associate professor of earth sciences recently completed a three-year term as a FAR chair on the NCAC Sports Caucus, the assembly of athletic administrators and FARs from each conference member that acts on legislative proposals, initiates proposals of its own, and recommends legislation to the NCAC Presidents’ Council. As chair, Judge led the conference-wide Sports Caucus meetings and attended the NCAC Presidents’ Council meetings to serve as a liaison on key discussion points pertaining to items sent forth from the caucus. Judge was a vital member of the NCAC Steering Committee, NCAC Health and Safety Committee, and NCAC Financial Opportunities Committee, all of which were formed to address COVID-19 concerns for NCAC member institutions. During her tenure as chair, Judge revised “FAR 101: NCAC FAR Best Practices,” an important document outlining the responsibilities, strategies, and challenges facing FARs within the NCAC.

“We in the NCAC are lucky to have Shelley as part of our community,” said Alexander Luchowski. “It is no exaggeration to say that we would not have made it through last year as successfully as I believe we did without her. She was invaluable in crafting our plans, and was an enormous part of our ongoing efforts throughout the 2020-21 academic year to continually revise our guiding documents as we sifted through all of the new information coming at us daily. It is amazing to me to think that she did all of this work on the conference level, while being an integral member of her own campus COVID response team at Wooster, fulfilling her campus committee responsibilities, and teaching students who were physically in her class, as well as those scattered across the country and around the world. I can think of no other FAR who deserves to be honored as the NCAA Div. III FAR of the Year more than Shelley Judge does for her work last year.”

On campus, Judge and Pasteur, professor of mathematics, regularly advise students on a range of topics in one-on-one settings. They work with student-athletes, coaches, faculty, and the dean for academic engagement when there are scheduling conflicts between academics and athletics. Judge and Pasteur educate faculty members on NCAA and NCAC issues and Wooster athletics’ mission and philosophy. The duo actively participate in recruiting efforts by meeting with prospective student-athletes and families to answer academic questions about Wooster and they are part of admissions panels for admitted students. With Judge and Pasteur leading the nomination process, Wooster’s had seven NCAA Postgraduate Scholarship recipients in the last four academic years, and the Scots have finished in the top-five for most recipients across the entire NCAA (Div. I, Div. II, and Div. III) twice in that span.

Elsewhere, Judge serves on numerous search committees, including the athletic director one in 2020. The former discus and shot put thrower at the University of Mount Union co-started a program in 2014 that paired faculty with each of Wooster’s teams, and Judge later attended the NCAA Div. III FAR Fellows Institute to help fine tune her effectiveness at the campus, conference, and national level. More recently, she co-taught the course “Why Sports Matter,” a class to reflect on collective loss during COVID-19.

“Wooster is so very fortunate to have Drew and Shelley on our team,” added Amy Heasley Williams, director of athletics and physical education. “I’m not sure you’d find bigger cheerleaders of our students and coaches. The “Why Sports Matter” class was borne out of the anguish she saw when it was announced that our fall seasons were canceled due to the pandemic. One of the first-year students told me that it was hands-down her favorite class of the year. The student learned so much about Wooster and its resources and was challenged to stretch her imagination. The class gave her a point of connection to the bigger, broader world of college and collegiate athletics, and it made her realize she belonged at Wooster. This is one of many stories that highlight Shelley’s accessibility, attitude, and willingness to serve her students, and emphasizes the important value of the faculty athletics representatives to our institution.”

Of note, Judge, who has served as a FAR at Wooster since 2012, is the second recipient of this award.