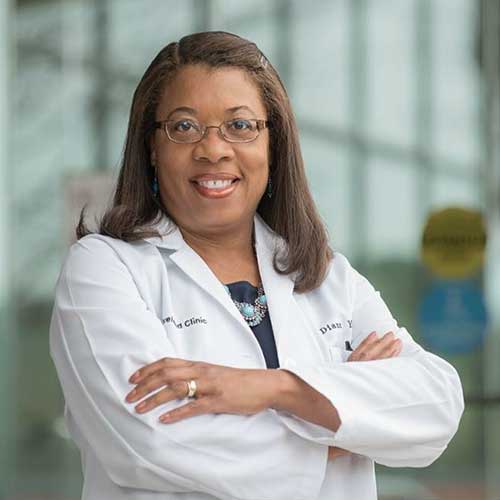 In 2020, of the 13,204 babies born in Cuyahoga County, 101 didn’t make it to their first birthday. The majority (73%) of these babies were African Americans of all socioeconomic levels. College of Wooster chemistry alumna, Dr. Diane Brown-Young ’87, an obstetrics and gynecology physician at Cleveland Clinic, is part of a movement to change these statistics and reduce these racial inequities. “We have a problem in Cleveland, nationally, and even worldwide. We have a problem with high infant mortality rates, as well as high maternal mortality rates among women of color,” she said.

Brown-Young is the Women’s Health Cleveland Clinic representative for First Year Cleveland, an organization that addresses issues related to extreme prematurity, infant mortality, inequalities, inequities, maternal mortality, and racism. In fall 2021, she worked with the Cleveland Clinic Diversity and Inclusion Department to develop an interactive curriculum addressing unconscious bias and racism in healthcare. “The main goal is for those involved in medicine to realize that we all have biases, and we cannot let our biases impact patient care in a negative way,” she said. “We must continue to build trust among our patients so they can adhere to their plan of care and have favorable medical outcomes.”

Maternity care first captured Brown-Young’s interest her sophomore year at Wooster during a summer scholars’ program with MetroHealth Medical Center in Cleveland. She worked with pregnant mothers, collected samples, and analyzed data in a study looking at how much of the epidural medication crosses the placenta and gets to the newborn baby, and she was part of two papers that were published. “I was amazed. It was from that time on that I realized what a great field obstetrics was and that it was something I was interested in,” she said.

Coming to Wooster from Cleveland Public Schools, Brown-Young was intimidated by some of the other students who came from private schools, and while she felt extremely welcome on campus, she had some of her first experiences with racism in Wooster. “It helped to build me,” she added, “I knew I would have to fight to continue my education.” She quickly proved herself to be competitive on exams and made top grades. Her first final in chemistry, “showed with hard work and dedication, I could succeed and compete with anyone,” she said. Professors in her chemistry major like the late Theodore Williams the Robert E. Wilson Professor of Chemistry, and LeRoy Haynes, emeritus professor, made the subject fun by allowing students to ask questions and supporting her along the way. Despite the challenge of taking math and science classes in the same semester, Brown-Young dove in and thrived in classes in biology, physics, chemistry, and math, but appreciated the opportunity to balance out her experiences with classes in music, religion, and poetry as well as running on the track team her senior year. “The rigorous learning and Independent Study process sets students up to be successful in everything that they do,” she said.

The work Brown-Young does today includes her full-time clinical practice and serving as the clerkship director for third-year medical students, leading efforts to teach, evaluate, and assess those rotating in obstetrics and gynecology. She educates students and doctors about the mistrust that people of color have in medicine and how to have better conversations with patients. “In addition to exposing students to various aspects of the OB-GYN field, most of all, we need to listen to our patients, and recognize that some have underlying health conditions and will need extra care,” she said. “We are creating care-paths and strategies to decrease infant mortality rates in Cleveland.”