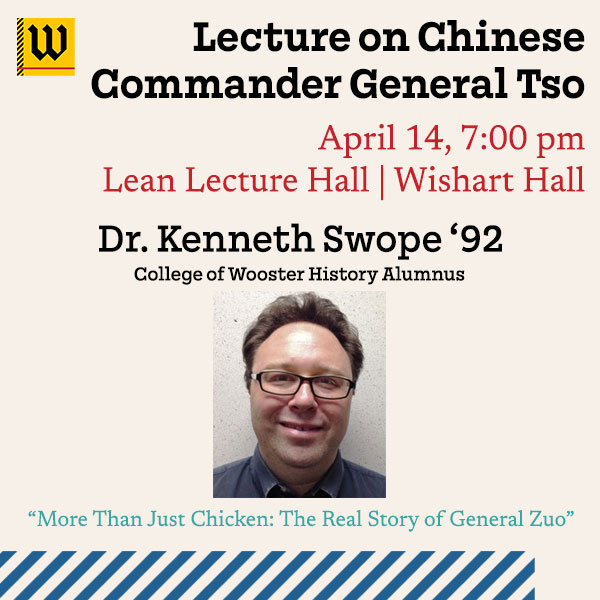 College of Wooster Alumnus and Professor of History Kenneth Swope ’92 will present a lecture on General Zuo Zongtang (1812-1885), a famous Qing dynasty military commander, on April 14 in Lean Lecture Hall in Wishart hall (303 E. University St.) at 7 p.m. Swope explains that many Americans know the name Tso as the namesake of the spicy sweet dish known as General Tso’s (Zuo’s) Chicken at many American Chinese restaurants, but few know the full history of the Chinese leader. Swope’s presentation, “More Than Just Chicken: The Real Story of General Zuo,” is sponsored by the history, Chinese, and global and international studies departments and open to the public.

“Swope is one of the leading historians of war and the military in China, and his current research provides an important historical perspective on China’s relations with both Russia and the province of Xinjiang,” said Jim Bonk, visiting assistant professor of Chinese and East Asian studies, who’s also asked Swope to speak in his Introduction to East Asia course during the week in addition to the presentation. “China’s relationship with Russia is particularly important to understand as the war in Ukraine unfolds.”

Swope earned his degree in history from Wooster, and his research for his junior and senior Independent Studies have inspired multiple publications and research. “I.S. was totally a springboard for my subsequent academic career,” he said. “Working on I.S. gave me the discipline and organization to finish a major project on my own. I still take all the notes for my books on 3-by-5-inch index cards like Dr. Gedalecia taught me in 1989.”

His senior I.S. about the fall of the Ming and rise of the Qing dynasty in China, spanning 1570-1683, led him to specialize in late Ming and early Qing military history in graduate school, and later three solo authored books, three edited books, and several dozen articles and book chapters. He is the author of A Dragon’s Head and A Serpent’s Tail: Ming China and the First Great East Asian War, 1592-1598, On the Trail of the Yellow Tiger: War, Trauma, and Social Dislocation in Southwest China During the Ming-Qing Transition, and The Military Collapse of China’s Ming Dynasty, 1618-1644, which was featured on the podcast “New Books in Military History” and named a Choice Outstanding Academic title by the American Library Association. His current project studies the Qing Dynasty General, Zuo Zongtang, the subject of his presentation at the College. Swope earned his M.A. in Chinese studies and Ph.D. in history at the University of Michigan and is currently a professor of history at the University of Southern Mississippi.

The lecture on April 14 will cover Zuo’s long and storied career as he rose from poverty to help crush the largest civil war in history, the Taiping Rebellion. He finished off the notorious roaming brigands known as the Nian, defeated a series of Muslim revolts in northwest China and Central Asia that resulted in the creation of Xinjiang province, outmaneuvered the Russian empire to recover thousands of miles of lost territory, and contested the French in Taiwan and Vietnam. He did all this despite never earning the prestigious jinshi degree that was normally a prerequisite for the highest offices. Today he is rightly regarded as one of nineteenth century China’s greatest commanders and patriots.