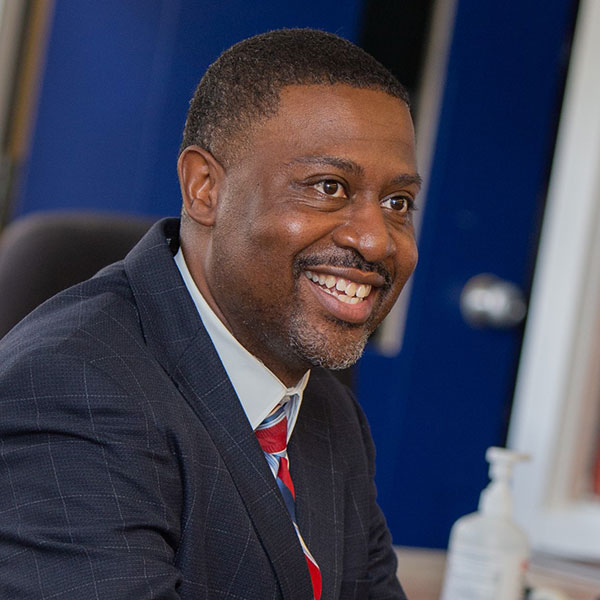 Kurt Russell, a 1994 graduate of The College of Wooster, was named the 2022 National Teacher of the Year by the Council of Chief State School Officers (CCSSO). He was announced as the winner in a segment of CBS Mornings on Tuesday, April 19 while appearing live on set.

Russell is a 25-year veteran of the classroom, serving as a history teacher at Oberlin High School where he teaches classes on African American history, U.S. history, International Baccalaureate history of the Americas, and a course on race, gender, and oppression in American and world history. Russell, previously named the Ohio Teacher of the Year, has been the Oberlin High School boys basketball coach since 1996.

Said Russell of his time at Wooster: “My Wooster education provided me with a Socratic methodology. Wooster allows students to think critically and to formulate their own thoughts. This is how I teach my class – giving students the opportunity to take ownership of their own learning.”

“I am truly humbled and honored to be selected as the National Teacher of the Year,” said Russell. “With this recognition, I hope to bring attention and awareness to the importance of diverse faculty and representative curriculum that helps students feel more empowered in their education.”

Russell, a history major with a minor in Black studies at Wooster, will now spend a year representing educators and serving as an ambassador for students and teachers across the nation. He plans to advocate for classrooms to better reflect the students within them – from a curriculum that reflects their backgrounds and identities to a more diverse teaching profession.

In a recent Associated Press story about his award, Russell noted the impact his family’s history have on his classroom instruction, saying that his mother, Retta Russell, marched with Rev. Martin Luther King Jr. as a high school student in Linden, Alabama. “That’s how I fell in love with history, by hearing those stories,” he told the AP.

Russell also mentioned a former eighth grade math teacher, Larry Thomas, who was the first Black male teacher he had encountered. “He was someone who looked like me in front of the classroom who all the kids enjoyed. This. Seemed like a profession that I could enjoy. It just changed my life,” he said in the AP piece.

Oberlin High School principal Brent Betts said of Russell: “One of the greatest things about Kurt Russell is the classroom culture he’s created. He’s created a culture where everybody has a voice and students feel comfortable sharing their opinions. He does now allow them to settle for less. They talk about tough subjects.”

Kurt lives with his wife, Donna, in Oberlin. They are the parents of two adult sons, Kurt Junior (KJ) and Korey. Kurt enjoys reading non-fiction and traveling.