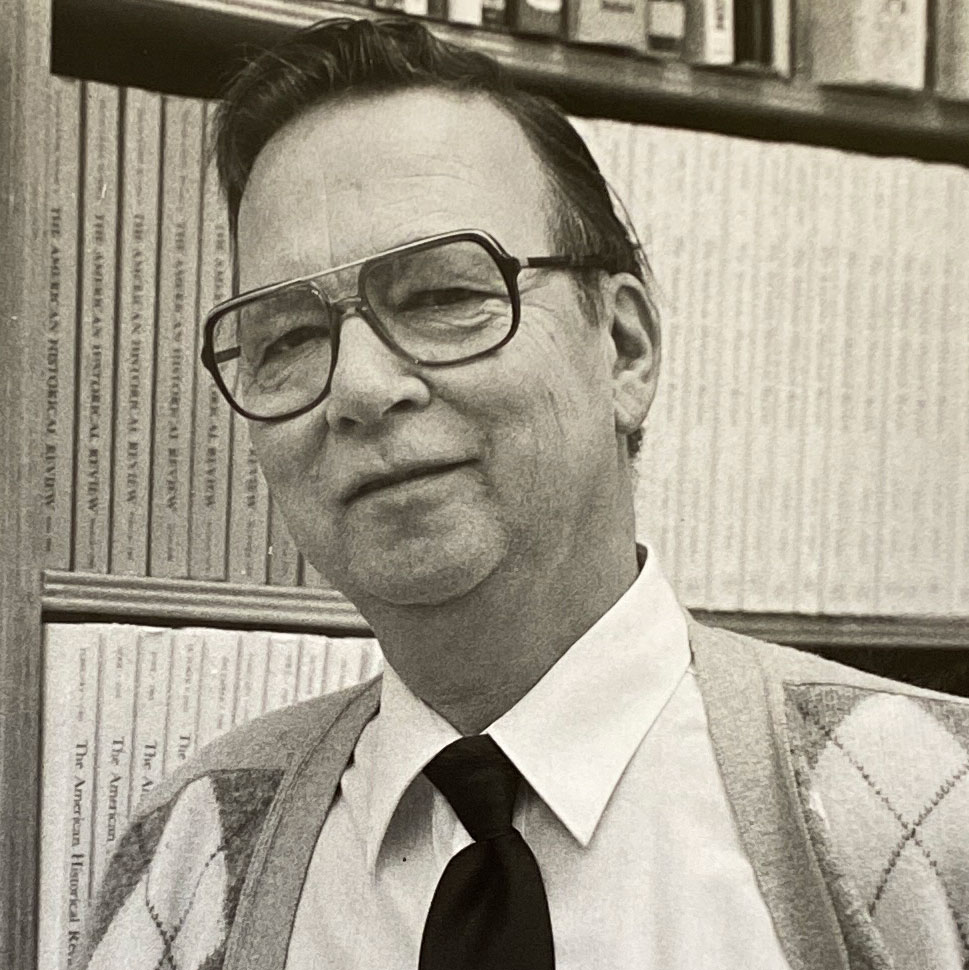 Daniel Fairchild Calhoun, a history professor at The College of Wooster for 38 years who died at 92 on May 7, 2022, will be remembered for his lively presence on campus, his expertise in international relations, and his encyclopedic catalog of the 5,600 Wooster students who took his classes.

Calhoun began teaching history at Wooster in 1956, was chair of the history department from 1969-72 and again from 1986-1988. He was the Dunham professor of history from 1989 until his retirement in 1994. A respected author of two books and more than 20 articles in professional journals and a popular faculty member, Calhoun gained additional notoriety in 1994 when a Wall Street Journal reporter wrote a feature story about Calhoun’s system of recording thoughts on each student in his classes. The newspaper article showed Calhoun with four boxes filled with 5,600 note cards representing every student who had ever taken one of Calhoun’s classes. The article stated that the index cards “went well beyond mere letters or numbers to reveal a teacher who gave more than lip service to the promise of a personal education.” Other news outlets took note of the story and reporters from around the country interviewed Calhoun about this comprehensive record of his time with students.

The index cards served mostly as a source material for job or graduate school reference letters, but Calhoun took pride in the recording of sets of siblings and multiple generations of Wooster students stored within the boxes of index cards. The cards had basic biographical information, but the little notes that went along with attendance and grade information intended to help jog Calhoun’s memory of his students – the student who was a Red Sox fan and always sat in the third row, another who turned in a “safe” paper but had the potential to do more – reflected a depth to the interest Calhoun took in his work.

Born in Fairfield, Connecticut, Calhoun graduated from Phillips Exeter Academy and Williams College. He earned a master’s degree from The University of Chicago and spent three years working for the Central Intelligence Agency, from 1951-54, before returning to Chicago to complete his work on a doctorate.

Calhoun’s knowledge of Russian history and international affairs came from both his studies and his time abroad with the CIA. As a result, his lectures were known to be lively and peppered with personal insights. Long after he retired, Calhoun was still a generous presence on campus, recalls Greg Shaya, the Henry J. and Laura H. Copeland Professor of European History.

“Dan Calhoun retired before I arrived at the College, but his influence was all around me,” Shaya said. “He was an insightful historian, a brilliant lecturer, and one of the loveliest people on campus. He audited my twentieth-century European history course when I was a junior faculty member, which made for some funny moments. The students knew him as the kind and thoughtful old man in the back of the room for much of the semester until I introduced the Cold War standoff over postwar Berlin. I told Dan that I couldn’t lecture him on the topic, so he came down to the front of the class and regaled students with tales from his time in the CIA in the early fifties, when he was just out of college, stationed in West Berlin, trying to make sense of
the international conflict of the Cold War. Students loved it—and I did too. Dan was a lovely friend and supportive mentor.”

Madonna Hettinger, Lawrence Stanley Chair and Professor of Medieval History, said she met Calhoun and the late John Hondros, emeritus professor of history, when she came to interview for a faculty position at Wooster in the 1980s. Calhoun had been teaching at Wooster for more than 30 years when they met, but Hettinger said, “I remember walking away from that dinner thinking that if someone like Dan, this close to retirement, could have so much passion for teaching, so much enthusiasm for independent study and working with students, then this could be a place for me.” Calhoun audited one of Hettinger’s classes, too, and, like Shaya, she found that his presence elevated the experience for the other students in the class.

Calhoun kept busy in retirement as a volunteer for Ohio’s Hospice LifeCare, People to People Ministries, the Wooster Hope Center, and Meals on Wheels.