The College of Wooster Department of Theatre and Dance presents fall productions Oct. 3-5 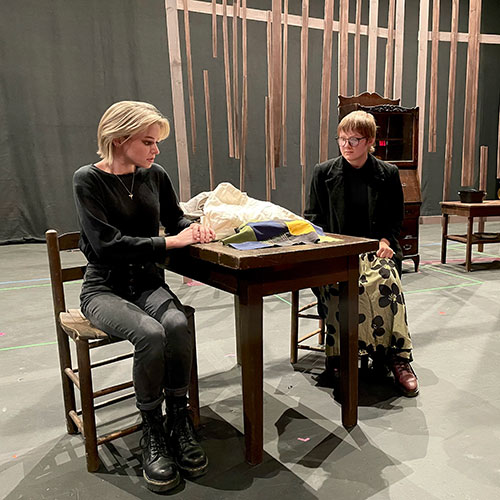 The Department of Theatre and Dance at The College of Wooster will present its fall productions of Trifles, written by Susan Glaspell, and CAGED, written by Jimmy A. Noriega Oct. 3 through 5 at the Freedlander Theater (329 East University Street) at 7:30 p.m. The plays will be performed back-to-back with a run time of approximately 80 minutes.

Directed by Jimmy Noriega, professor of theatre and dance at the College, Trifles is a period piece first written and performed in 1916 by Susan Glaspell and based on a true story.

“Trifles is based on a crime that took place over 100 years ago, but it asks us to continue thinking about the roles that sexism and gender discrimination play in the ways people investigate and prosecute crimes that involve women,” said Noriega.

At the beginning of Trifles, five people arrive at a farmhouse to investigate the scene of a murder, including a county attorney, a local sheriff, and the neighbor who found the body, accompanied by two of their wives. By the end of the play, the men and women arrive at different conclusions.  The play features Ethan Bardoe ’26, Kate Conway ’24, Rickey Cooper ’23, Cam Love ’25, and Anna Whiting ’26. Trifles and CAGED are both stage managed by Audrey Klosterman ’23. 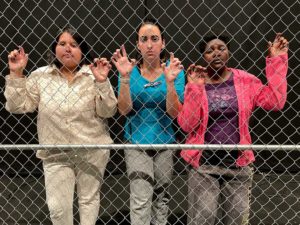 Stephanie Castrejón, Teresa Ascencio, and Amari Royal as children detained at the U.S.-Mexico border in CAGED. Photo by Jimmy A. Noriega

Written and directed by Noriega, CAGED focuses on the “zero tolerance” policy that separated families at the U.S.-Mexico border and left thousands of immigrant children incarcerated in detention centers. In the play, three children grapple with what it means to endure the journey north and to be separated from their loved ones. This fall’s production features Teresa Ascencio ’23, Amari Royal ’23, and Stephanie Castrejon ’16, who is returning to the College as a guest performer.

CAGED was originally conceived as a digital performance in 2020 in response to the COVID-19 pandemic and has been expanded for the stage. It was created in collaboration with Noriega’s award-winning theatre company, Teatro Travieso/Troublemaker Theatre and was chosen to be presented at an international theatre festival in Belgium this November.

“It is my hope that this play educates people about these inhumane policies and inspires dialogue about our broken immigration system that treats migrants as criminals, rather than as human beings,” said Noriega.

The productions are suitable for ages 10 and older. There will be no intermission between shows. For the safety of the audience, cast, and crew, masks will be required by everyone attending the performances.

Top photo 1: Kate Conway and Anna Whiting as the wives in Susan Glaspell’s Trifles. Photo by Jimmy A. Noriega

Photo 2: Stephanie Castrejón, Teresa Ascencio, and Amari Royal as children detained at the U.S.-Mexico border in CAGED. Photo by Jimmy A. Noriega