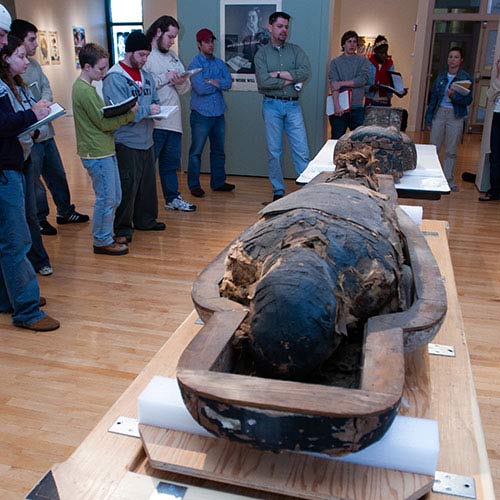 The College of Wooster Art Museum is hosting an event called “IN CONTEXT: The Wooster Mummy” on Nov. 9 at 7 p.m. in Lean Lecture Hall about the history of the Egyptian mummy that is held in the museum’s collections.

The mummy was purchased by missionaries near Akmim, Egypt and donated to the College in the 1880s. It was on view in Old Main until 1901 when the building burned and entered CWAM’s collection in the 1960s.

Director and Curator of CWAM Marianne Wardle, Monica Florence, professor and department chair of classical studies and professor of comparative literature, and Bhakti Mamtora, professor of religious studies and South Asian studies will lead the event which is open to the community. They will discuss “the history of the mummy from its origin in Egypt to its arrival in Wooster, how it has been useful in study, teaching, and research, and the ethics of keeping human remains in museum collections,” Wardle said.

Wardle hopes that this lecture will demystify the tales about the mummy for the College community. “The mummy is an interesting object historically and in the history of the College. We have the obligation to respectfully and ethically study and care for it,” she said. “While there have been rumors and mysteries around it, ultimately the mummy is a person from whom we have the opportunity now to learn.”

This event is being held in conjunction with CWAM’s current exhibition, “CONTAINED: The Art of Holding it Together,” on display in the Sussel Gallery of the Ebert Art Center through Dec. 9. “The objects in the exhibition come from all around the world and from a very long time span, but they were all made by hand, held, used, and at some point offered as a gift to the museum,” Wardle said.

The mummy’s sarcophagus is not included in the exhibition, even though Wardle says it “is the oldest container in the collection still doing its original job.” She refrained from including it in the exhibition because she thought it would overshadow the rest of the objects. She instead opted to hold this special event focused exclusively on the mummy. “This event allows us to celebrate and learn about the mummy and its container in an interesting and responsible way,” Wardle said.

Explore the diverse traditions of collection, curation, research, display, and preservation and plan your career