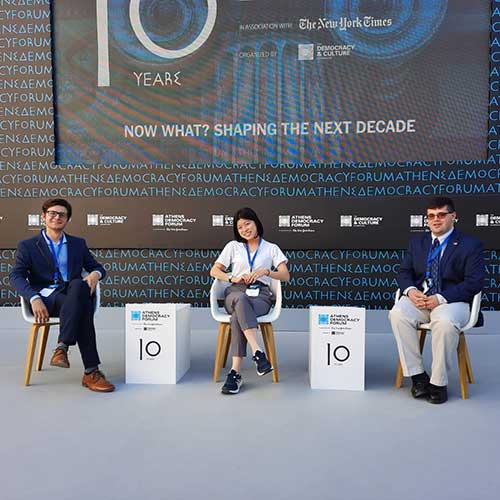 Thomas Pitney ’24, a political science and French & Francophone studies major, represented The College of Wooster and the Global Liberal Arts Alliance at the Athens Democracy Forum in Athens, Greece, Sept. 28-30.

He was selected as one of approximately 20 student voices from around the world to participate in the 2022 forum, which addressed “A Decade of Democracy: What Now?” The forum is organized by the Democracy and Culture Foundation in association with the New York Times to be a leading global platform for dialogue and action-oriented ideas to make democracy work. In addition to the student participants, attendees include leaders from government, business, civic society, and the nonprofit sector. This is the fifth year that Wooster students have attended the forum.

“The greatest joy I got from the forum was talking with the other students from around the world. We had really rich, and interesting discussions about various challenges with democracy, how we experienced democracy, or not, depending on where we were from and how we believe democracy could be improved in the future,” Pitney said. Their conversations were held on the buses to and from the forum, during meals and during downtimes. They focused a lot on youth engagement, but they also shared perspectives about the war in Ukraine, U.S. politics, corruption in democracies, and the wave of anti-European union sentiment around the world.

“We really tried to dig deep into various issues whether it was elections, government functions, culture, or foreign policy. Those are hard topics to discuss if you don’t have time, but the forum gave us lots of opportunities to discuss. Our student group had such a tight bond. We really connected quickly and were willing to have these discussions,” he said.

Pitney thanked the Wooster faculty who nominated and prepared him for the forum. He was nominated by Kent Kille and Matthew Krain, political science professors. Sarah Sobeck, chemistry professor and associate dean for experiential learning, was instrumental in guiding him through the competitive GLAA application process.

The experience honed his listening and critical thinking skills and challenged him to evaluate his own and others’ opinions. “I came back to Wooster understanding the world around me better than before. I’m grateful that Wooster supports the Athens Democracy Forum. It’s a great opportunity for students who want to be engaged and explore global issues and democracy.”