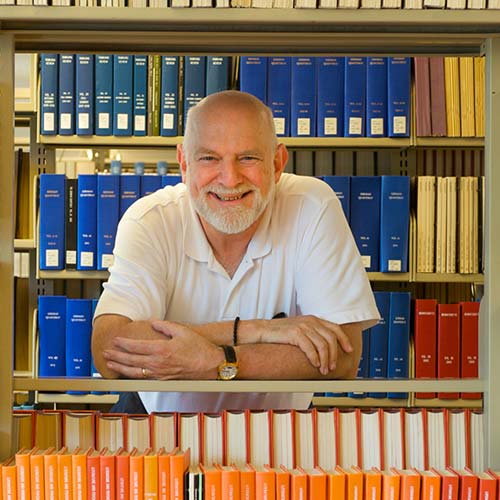 Damon Hickey, emeritus director of libraries at The College of Wooster passed away on Monday, Dec. 26, 2022, in Wooster, Ohio. Hickey served the College for 17 years directing the College libraries through an expansion and the transformation of an information technology revolution.

When Hickey began his tenure at Wooster as director of libraries in 1991, Andrews Library had a card catalog in the lobby and the main forms of technology were a few microfilm readers and individual computers. He shepherded the College through the renovation of Andrews Library and expansion to adjoin the Flo K. Gault Library for Independent Study and later the renovation of Frick Hall (the original University of Wooster Library) to become the Timken Science Library in Frick Hall, bringing together four previously separate departmental libraries. He oversaw the development of the Special Collections department, bringing together important archival, manuscript, and printed resources. In his 17 years in the role, he saw to the transformation from a card catalog to a fully online catalog allowing students access to resources from across the World Wide Web and the conversion from printed indexes and periodicals to online databases. He was one of the founders of the Five Colleges of Ohio Consortium in 1996. The Consortium merged Wooster’s online library system with those of Denison University, Kenyon College, and Ohio Wesleyan University to form the CONSORT library system which later joined OhioLINK, a statewide academic library consortium, resulting in a steady expansion of the libraries’ electronic journals, books, and other databases.

Hickey saw his role as a librarian not only as a collector, preserver, and organizer of resources but as a conduit to create meaningful connections. His work connected students and people in the College community with the information they were looking for, different kinds of knowledge, and with ideas and authors through the written word. Hickey was the author of articles, chapters, and books on religion, history, and library science and was active in historical and library organizations. He retired from his position at Wooster in 2008 but continued his service to the College by teaching a first-year seminar: Being Human in the 21st Century, advising two program houses, and serving as mentor and group facilitator for the Worthy Questions program. He also served as interim director of the Lilly Project for the Exploration of Vocation from 2008-2009, the program that laid the foundation for Wooster’s APEX Fellowships and Social Justice Internships.

Hickey, who grew up in a family of librarians, worked as a library student assistant at Rice University where he earned his B.A. in philosophy, and as a student at Princeton Theological Seminary earning his M.Div., he worked in circulation and special collections for two years. He earned his master’s degree in library science in 1975 from the University of North Carolina at Chapel Hill and his Ph.D. in history from the University of South Carolina at Columbia in 1989. He began his role as director of libraries at Wooster after first serving as a Presbyterian minister in Texas and Oklahoma from 1969 to 1976 and later as associate library director and curator of the Friends (Quaker) Historical Collection and adjunct assistant professor of history at Guilford College in Greensboro, North Carolina from 1975 to 1991.

After his retirement from Wooster, Hickey and his wife, Mary, established the Damon D. and Mary T. Hickey Endowed Library Prize recognizing the graduating senior who has done the most outstanding work as library student assistant each year. They also established the Damon and Mary Hickey Endowed Emergency Scholarship Fund to support students in need of financial assistance due to circumstances beyond their control to allow them to continue their studies at the College.

Memorial services for Hickey will be held on Saturday, Jan. 7, 2023, at 11 a.m. at St. James Episcopal Church, 201 N. Market St., Wooster, with Rev. Evan Fischer officiating. His obituary can be found here: https://www.the-daily-record.com/obituaries/pwoo0390819.