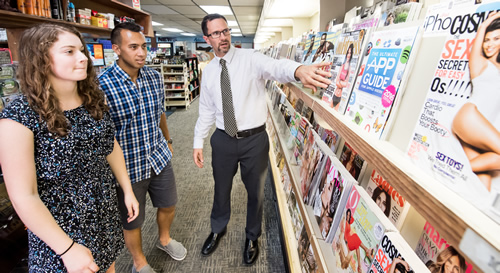 WOOSTER, Ohio – The social pressures women face in regards to appearance, specifically body image, may be lessening asserts Bryan Karazsia, associate professor of psychology at The College of Wooster and lead author of “Is Body Dissatisfaction Changing Across Time? A Cross-Temporal Meta-Analysis,” a study that generated national attention this summer as well as cautious optimism for parents of young daughters.

After analyzing data on body image and body dissatisfaction from surveys covering a 30-year period and 120,000-plus participants, Karazsia formally concluded that “these findings … offer evidence that sociocultural shifts in body acceptance and body diversity may be countering thinness-related pressures for girls and women.”
“Hey, this is good news, this is great, maybe these pressures are going down,” added Karazsia. “I hope people see this and are inspired, both in research and how women think about their bodies and men, too.”
This good news comes in the face of body mass indexes rising and humans being physically larger than ever, admitted Karazsia, thus he warns eating disorders and the like are not going away. The statistics, though, do show a positive shift in people’s attitudes.
“The term body diversity can turn into body acceptance. Size, shape, and color isn’t health … health is health. You can be large and still be healthy,” he explained. “You don’t have to look like a Victoria’s Secret model to be healthy. In fact, if you do, you may be doing something wrong.”
Karazsia presented his findings at the American Psychological Association’s annual convention in August, and shortly after, he was receiving interview requests from the Los Angeles Times and Time among other media outlets. “It’s been wild, it’s somewhat flattering, it’s humbling,” said Karazsia about his new-found fame. “I’ve studied this subject for about a decade and poured two years of my life into this project, and it’s a flash in the pan, then the story goes away. The story continues, though.”
In the L.A. Times piece, it was noted that Women’s Health magazine had decided to remove the all-too-familiar language seen in supermarket check-out lines and magazine racks across the nation, such as “Is your body bikini ready?” While Karazsia does not think the results of his study are directly responsible, he is pleased.
“There’s a socio-cultural shift going on. A magazine making that decision to use careful terminology, whether it’s because of that shift or a response to their audience, either way it’s good,” he said. “Society is saying don’t market (women) like that anymore. Some countries have banned models under a certain size.”
Karazsia credited the success of the study in part to students Zachary Mastarich ’17 and Gina Williamson ’17, who poured through the data. “I couldn’t do it alone, so the College’s sophomore research program was huge. Gina and Zach did graduate level organization and quality of work,” he commented.
Karazsia’s work is not done by any means, as he wants to explore similar topics. “Something we need to study more is the drive for leanness. We looked at muscularity and thinness, now is thinness going down because it’s being replaced by leanness? We haven’t studied it enough. Maybe in 20 years, we’ll see how things changed again.”

Image: Associate professor of psychology Bryan Karazsia, with assistance from seniors Zachary Mastarich and Gina Williamson, analyzed 30 years of data and determined women are more accepting of their body image today, an exciting development that led to some national publicity this summer.