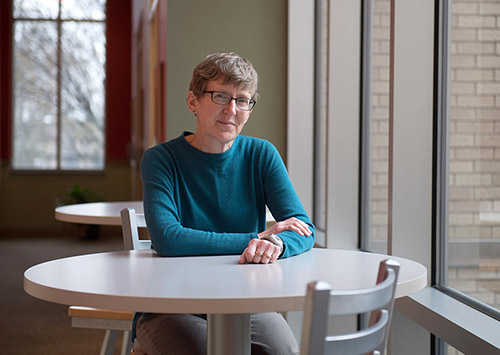 WOOSTER, Ohio – Rising global temperatures, increases in greenhouse gases, the melting of polar ice caps, and an increase in natural disasters and severe weather events have been widely reported, but a new climate change topic – the mental health effects – is also gaining traction, buoyed by a report sponsored by the American Psychological Association and ecoAmerica, for which Susan Clayton, Whitmore-Williams professor of psychology at The College of Wooster, served as the lead author.

In their report, “Mental Health and Our Changing Climate: Impacts, Implications, and Guidance,” Clayton and her co-authors laid out a novel way to think about climate change. While many previous research efforts and studies have emphasized the physical health ailments from extreme weather, impacts on mental health are also common and important consequences of climate change.
The fear and grief associated with such events often lead to anxiety, depression, unhealthy behavior, and even post-traumatic stress disorder (PTSD), according to the report. For example, statistics on survivors of Hurricane Katrina show that “suicide and suicidal ideation more than doubled, one in six people met the diagnostic criteria for PTSD, and 49% of people living in (the) affected area developed an anxiety or mood disorder.”
Clayton participated in preparing this report to fill in an information gap. “The more we thought about climate change, the more we recognized that it was likely to have psychological impacts on the way people were thinking about the world and about themselves. We also had a more practical purpose, which is to talk about climate change in ways that would seem more relevant to more people. So that it wasn’t just happening to a few people who live in low-lying (areas), but these are impacts that can affect any of us and the people we know,” she said.
The media has taken notice of Clayton’s report. The APA stated that 40 outlets have picked up the climate change and mental health report, and she was quoted prominently in recent Washington Post and CNN.com articles and also interviewed by Newsweek and the Los Angeles Times.
The report also presented recommendations on how to cope with the mental health impact of climate change, most notably for practitioners and policymakers to provide social support and for one’s own preparedness.
“One goal is really to get people to think about climate change as being more personally relevant … both because of the increase in natural disasters, major storms, and so on, but because so many of us are going to be effected by more subtle, gradual changes in climate that even if they’re not devastating can lead to increases in stress, depression, and anxiety, and threaten our communities. That said, I don’t want people to think that this is just another reason to be depressed, but to think about the importance of becoming prepared for climate change. Inform yourself about what the effects are likely to be in your area. There are things we can all do to better defend ourselves from both the physical and the mental negative impacts of climate change,” Clayton advised.
View the 70-page APA report here.