Different Disciplines but the Same Challenges 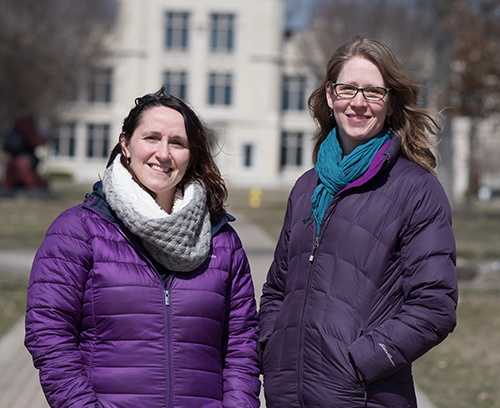 WOOSTER, Ohio – Angie Bos and Sharon Lynn work in different disciplines – Bos is an associate professor of political science, Lynn a professor of biology and neuroscience – but as academics who are also mothers, both have experienced the challenge of trying to participate in academic conferences with young children.

“We had our first kids within about two weeks of each other,” Lynn recalled. “We were in the same birth class, even had the same midwife.” And less than nine months after giving birth, Bos and Lynn both learned how difficult it is to navigate an academic conference with a baby.
Childcare options can range from nonexistent to prohibitively expensive, and often are not publicized far enough in advance to make plans. The same goes for accommodations for nursing mothers. Some conferences ban children from the exhibit hall, where much of the professional networking takes place. And with many conferences spread over several days and multiple locations, you can find yourself scheduled to present a paper on day one and moderate a panel on day four, leaving days two and three to entertain an increasingly bored child in a strange city. “I had one conference where there was a nice room for nursing mothers,” Bos recalled, “but it wasn’t in the hotel where any of my presentations were.”
Bos and Lynn have traded conference horror stories and shared ideas about ways to make the events more family-friendly, but neither realized that the other was involved in writing about the issues until this spring, when two journal articles appeared – one by Bos and two co-authors in Politics, Groups and Identities, the other by a professor at UC-Davis and a group of collaborators, including Lynn, who call themselves the Working Group of Mothers in Science, in the Proceedings of the National Academy of Sciences. Bos and her co-authors followed up with a shorter opinion piece on Inside Higher Ed, a national higher education news website.
“Conferences are vital to scholars’ visibility in the research community, to landing book contracts and creating research connections that lead to positive promotion letters,” Bos and her co-authors wrote. “Yet even though women’s presence in the academy has increased, few institutions and academic associations have considered, much less addressed, the particular hurdles conference participation presents for women scholars with children.”
Both articles make similar recommendations for improving the situation: more on-site childcare options and family-friendly events; better communication of those options well in advance of the event; greater willingness on the part of conference organizers to accommodate parents’ scheduling needs; and more resources from both the national organizations and individual scholars’ home institutions to defray the costs. Lynn also suggests creating social networks among academic parents, who can provide input during the planning phase; input that can mean “the difference between well-intentioned and well-planned.”
The response to the articles has been largely positive, and Lynn and Bos hope that they serve to continue and broaden the conversation on an important issue.