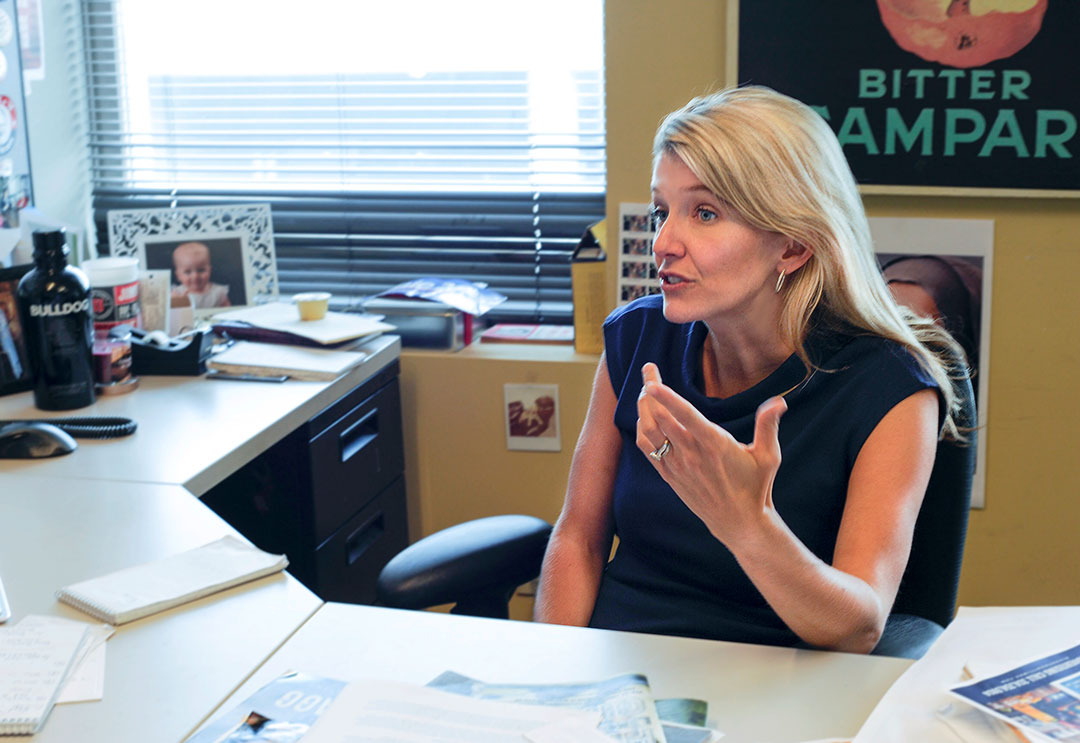 “People have always had a love-hate relationship with their hometown papers,” says Sarah Fenske, who used to keep a running list of the derogatory nicknames people hung on their local dailies. The Lorain Morning Journal, where she cut her journalistic teeth after graduating from Wooster with a double major in English and political science, was known as the Morning Urinal; the Canton Repository was dubbed the Canton Suppository. And on, and on.
What has changed, Fenske says, is that instead of people getting their news delivered in a nice, tidy bundle each day and digesting it at least partially before reacting, “things are winging across their screens on Facebook or Twitter one headline at a time, and they just react without thinking, without even reading the story. We used to get letters to the editor, and they’d call us names, but at least they had read the story first.” Today, not so much. “The world prioritizes having a hot take.”
As a student at Wooster, she took a course on magazine writing, whose final requirement was that the class produce a glossy magazine. “I took that magazine with me to my first eight job interviews,” she recalls, “and they said, ‘Really? You were the editor of this?’ My practical experience helped me to get my foot in the door and I just had to push the rest of the way through.”
Fenske loved the pace of working at a daily paper, but after two years in Lorain, she took a job with the Cleveland Scene, an alt weekly where she could write more deeply reported, long form stories. She loved it, and has never looked back, building an impressive resume over the past 15 years as a reporter, columnist, and editor at some of the top alt weeklies in the country, including the Phoenix New Times and LA Weekly.
Although she has had offers to return to daily journalism over the years, Fenske always came to the same conclusion: “Why would I want to do a seven-inch story on the school board, when I can do 4,000 words on a bigger topic? Everybody else is working off press releases; we’re digging. And now, alt weeklies are also breaking stories online every day, so I’ve got that pace, too. I’ve got the best of both worlds.”
In 2015, she was named editor-in-chief of the Riverfront Times in St. Louis, a homecoming of sorts for Fenske, who had been the paper’s managing editor before moving west to take the top job at LA Weekly. Despite the daily demands associated with having her name atop the masthead, she still does a lot of writing, for both the print and online editions, covering everything from city hall and the local economy to restaurants and the arts scene. And a couple of times a year she gets her long-form fix, reporting and writing a 4,000- to 6,000-word cover story.
At a time when anyone with a smartphone has access to an endless supply (or bottomless pit) of news, opinion, and entertainment, how do Fenske and her colleagues continue to make a city-based weekly essential reading, week after week?
“You know,” she says, “there are more journalists than ever clustered in just a few places – New York, D.C., L.A., San Francisco – and so few in the middle of the country. We may have an ongoing fight to make our business model work, but not to get people to read us. My phone rings all day with people offering us tips.”
“We’ve got the playing field a bit to ourselves. I just wish I had eight more reporters.”
[A version of this profile first appeared in the Fall 2017 issue of Wooster magazine.]