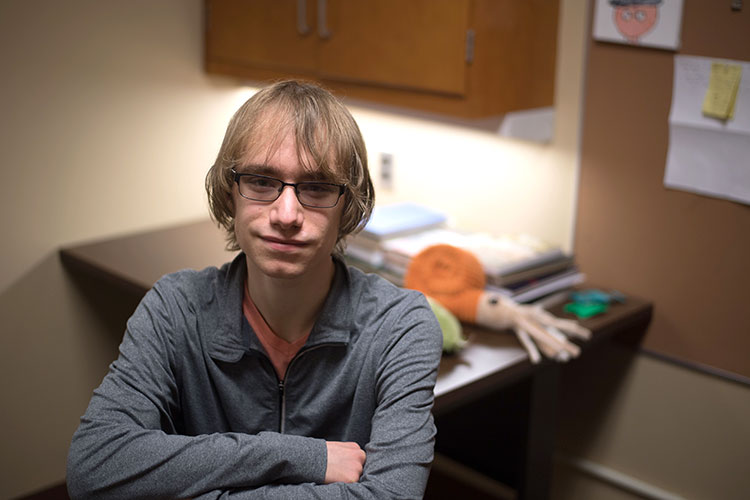 Brandon Bell first realized he could combine his interests in history and geology through a summer research project studying the 1969 flood in Wayne County. “I tied geology, the layout of the land, and topography to its effects on people and their memories of the flood. I realized that I could combine geology and history by looking at a moment where they came together like a natural disaster or major geological event.”

The natural disaster he chose for his Independent Study—the San Francisco Earthquake of 1906—marked the beginning of seismology in the United States. He became interested through his studies of how seismology developed in Japan. “Japan lies along so many fault lines compared to countries in Europe or the U.S.,” said Bell. “Japan has much more frequent earthquakes, so they have more data. People had been living by the faults for centuries. Earthquakes were a much more integrated part of life for them.”

Still considered one of the most significant earthquakes of all time, the California earthquake of 1906 allowed American geologists to recognize the importance of seismology. “Comparatively, Americans had only recently settled California a few decades ago,” Bell said. “They needed to have a system of seismology to explain why earthquakes were happening and looked back at what Japan and other countries in Europe had done. They stood on top of those existing concepts and built their own.”

Bell found that the Japanese scientists who came to California to study the earthquake faced the same struggles and persecutions that Japanese immigrants and residents experienced at the time. “Japan and America are competing on a world stage,” he explained. “They have very nationalistic ideologies in both nations. Nationalism is expressing itself not only in the exclusion that Japanese immigrants were facing but it’s also being faced by Japanese scientists who are trying to communicate their ideas to American scientists. These barriers prevented them from having their ideas shared or expressed.” Though credit and citations didn’t follow the same rules used today, Bell compared the theories of American and Japanese scientists of the time and found patterns by “looking at how closely ideas are phrased or matched to show connections.” He found that a theory developed by Henry Reid about the causes of earthquakes made assumptions based on the research of Japanese scientist Fusakichi Omori.

As part of his research, Bell received Copeland Funding to travel to San Francisco in person. He had the opportunity to review the papers of the top geologists at the Bancroft Library at the University of California, Berkley and visit the California Academy of Sciences. The paleontologist at the academy shared information about fossil collections lost in in 1906. “Their building has been destroyed twice so they are always thinking about prevention, minimizing damage, and how they can prepare for earthquakes,” said Bell.

Majors in both history and geology made Bell uniquely suited for this research. “Having the history major allows me to look at the history of science and trace how ideas were shared and changed over time, but being a geology major helps me to know the significance of those ideas and how they support certain conclusions,” said Bell. “As a scientist if we don’t understand the full history of ideas we’re less able to replicate that data for the future.”

[A version of this story appeared in Wooster magazine.]