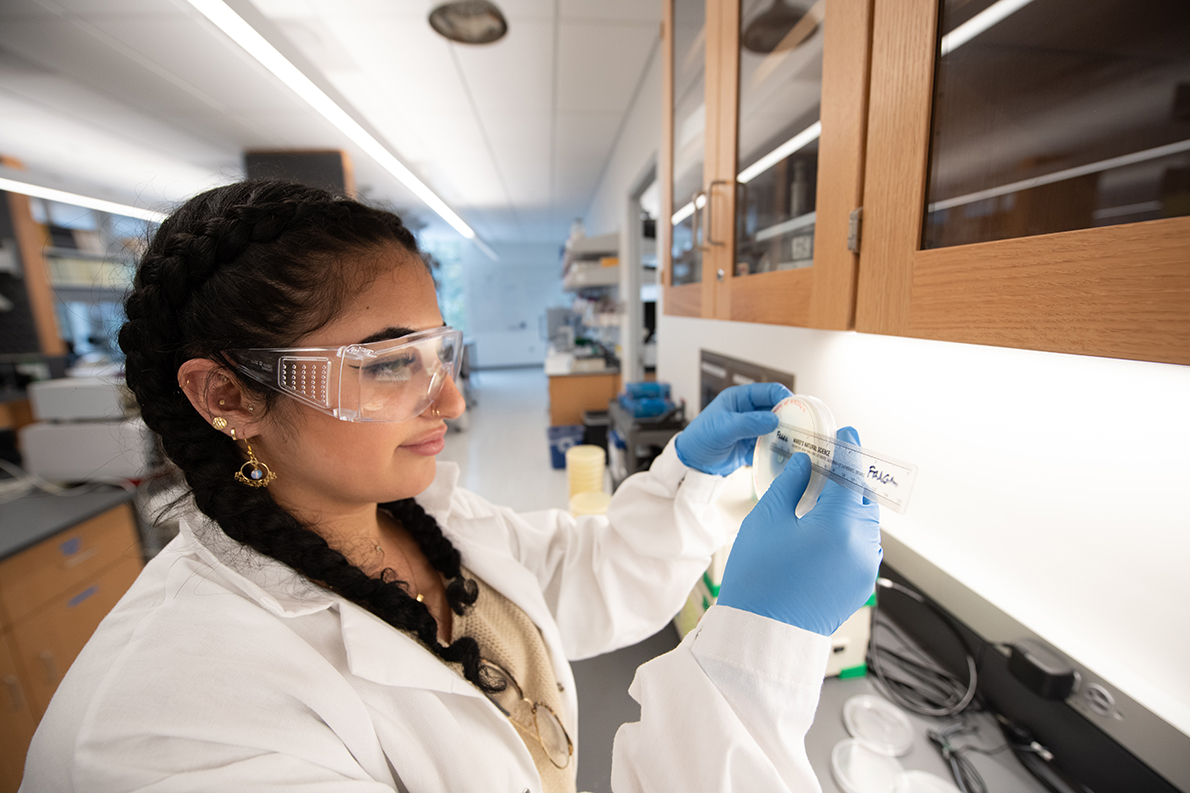 A first-generation Lebanese American, Araam Abboud grew up in Cleveland and spent her summers in Lebanon, always around a number of cultural remedies and traditions. When she took History of Ancient Medicine her first year at Wooster, the work of Guido Majno, a physician and medical historian who studied ancient remedies in the mid 70s, caught her interest. “I like knowing how these ideas came to light. By looking back and studying ancient medicine, we not only can give them the credit they deserve but adapt these treatments and understand if we can apply them modernly,” she said. Monica Florence, associate professor of classical studies, who taught the course, adds, “When we look to the past, we can see the historical context for modern medicine. We understand better how different cultural beliefs affect medical care and treatment.”
For her I.S., Abboud re-created an ancient treatment called barbarum plaster described by Celsus in De Medicina in the first century. She worked with Florence to translate and interpret the wound theories of two ancient physicians, Celsus and Hippocrates, and determine their understanding and use of a modern concept known as synergism—“the idea that two ingredients alone have an effect on something, but they work better together, and the combined effect is greater than the effect of one,” Abboud explained. “In Majno’s work he re-created barbarum plaster in 1975 but didn’t test for antimicrobial properties. He determined it would have those properties from the ingredients. The main way that ancient remedies work is synergism which is why it’s important not to assume it had antimicrobial properties from the ingredients.”
In the lab, Abboud investigated the effects of the each of the ingredients as well as the barbarum plaster treatment as a whole. She followed the preparation instructions in De Medicina, but she explained that researchers don’t agree about what the ingredients are. “I have to be creative in reading primary sources and interpreting them myself rather than just acting on secondary interpretations. I had to make a judgment about the ingredient and then be OK with it and prove why choosing that ingredient was correct.”
Abboud’s research included a trip covered by a Copeland Fund grant to the National Archaeological Museum in Athens, home of the largest set of ancient medical tools used to treat wounds in this time period. “It allowed me to see the tools and visualize what they were used for. My primary sources explained the tools but didn’t have pictures,” she said. When she returned to campus, she used what she’d learned to re-create the treatment in the lab. For the last part of her experiment, she created a synthetic wound from fetal bovine serum and pepsin water infected with bacteria. “The plaster did inhibit the bacteria,” she said, explaining that one of the combinations of ingredients she tested led to greater inhibition which could suggest the presence of synergism.
Though she may be a few steps away from developing a modern treatment based on barbarum plaster, Abboud plans to continue to study ancient medicine. She’s looking at graduate programs that would allow her to earn a Ph.D. in the history of medicine along with her medical degree. “I’m a strong believer in holistic medicine. We can learn a lot by looking back at these remedies and treatments, and it’s a field that isn’t really explored as much as it should be.”
[A version of this story appeared in Wooster magazine.]