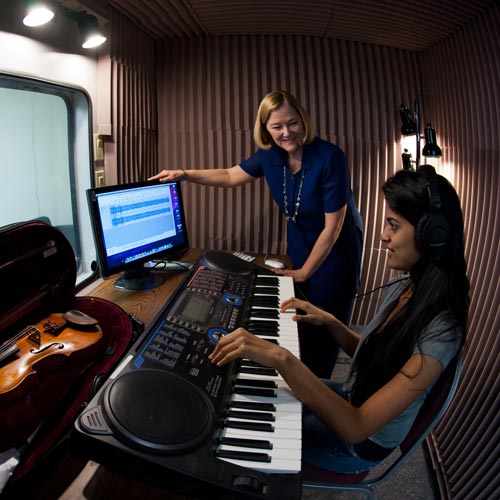 Like other music theorists, Elizabeth (Betsy) West Marvin ’77 first took an interest in music as a performer. She grew up singing in the youth choir and playing the organ in the church where her father served as a Presbyterian minister in Chevy Chase, Maryland. With The College of Wooster’s Presbyterian heritage, the College made an obvious choice for her, especially based on the strong reputation of the music program.

“When I got there, I knew I wanted to major in music, but I didn’t know what speciality within music,” she said, acknowledging that she “flirted with different types of music majors” including music education, voice, and others before majoring in music theory and composition as well as organ performance. She found the skills she took away including music theory and sight reading, classes in French and German (very important languages for a singer) as well as critical reading and writing prepared her for her later studies. She took advantage of a German study program in Vienna, where she took an art history course and gained experience navigating a foreign country. She also traveled with the Wooster Chorus and with then organ professor Jack Russell, to play and learn about different organs, their structure, and history.

Marvin found the liberal arts context for the music major at Wooster helpful in taking courses outside of music—an experience she continues to value today as a professor of music theory at Eastman, part of the University of Rochester, another school that embraces the balance of the liberal arts. As a student studying music, she explained, “It’s very easy to become completely focused on only music and to spend many hours in the practice room honing your craft.” While these hours are invaluable, Marvin also stressed the importance of “context that informs your performance decisions so that you’re not mimicking other people or flying by the seat of your pants, but you have a reason for the artistic choices that you make.” Building this context includes, “music history and music theory but then the broader circle of study like languages, psychology, history, and so on. Together, this context gives you a wider understanding,” Marvin said. Developing this liberal arts background allows students to become “well-rounded musicians who can think, speak, and provide context, and who are not so very narrowly trained in only performance or only composition.”

After completing her degree at Wooster, Marvin earned her master’s and doctoral degrees at Eastman in music theory. “All music theorists start out as performers, but they become intrigued with what makes music tick, the science and linguistics of music,” she said. In addition to being in a profession that constantly surrounds her with music and great performances, Marvin enjoys her role in training young musicians to develop concrete skills including being able to read, sing, and write down melodies, and on a deeper level helping them to become stronger performers. “I’m in contact with young musicians just starting out in their careers and helping them shape their view of musical structure and musical skills,” she said. “I’m very interested in the ways that musical analysis informs musical performance and how I as their theory teacher can help them shape a better artistic product.”