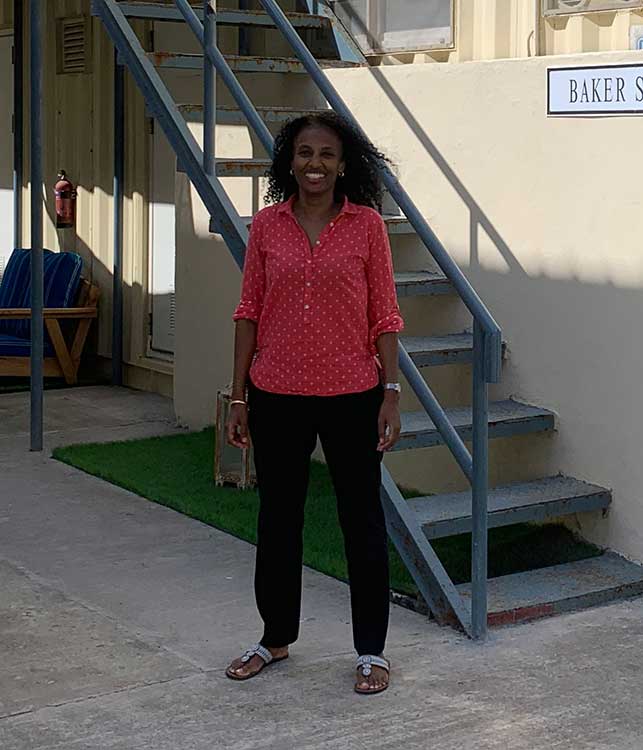 Mesky Brhane ’89 credits her education at The College of Wooster for preparing her for each step of her post-graduation path, including her Fulbright fellowship, doctoral program, and current position as the practice manager of Urban, Resilience, and Land at the World Bank. Brhane initially declared an English major at Wooster because she loved to read and write, and after developing an interest in international relations and studying abroad in Strasbourg, France, she decided to double major in French. Majoring in French helped her to receive a Fulbright fellowship to teach English in Paris after graduation. “It was thanks to the Wooster French program that I was able to have that opportunity,” Brhane said. “It just opened all sorts of career opportunities that I would not have had without it. It really changed my life in a way.”
Returning to the United States after a year in France, Brhane worked at an international not-for-profit organization in Washington, D.C. while applying to graduate schools. Though she didn’t quite know what she wanted to study, her Wooster education prepared her for many types of programs. “Wooster offers a liberal arts education that’s very broad in which you have exposure to a lot of different ideas while also providing you with critical skills,” Brhane said. Even though she hadn’t majored in political science, Brhane was accepted into the political science doctoral program at the University of Chicago, in part because of the skills she developed at Wooster. “I think I was able to get into the program because they knew I could think critically and write,” Brhane said, adding, “From the Independent Study they knew that I could do research.”
After two post-doctoral research and teaching positions, Brhane started working at the World Bank in 2004, where she now heads the Urban, Resilience, and Land department. Her department works particularly with countries in Africa, providing financial assistance to improve living conditions in urban areas, doing analytical work to better understand the constraints and opportunities of urbanization, and investigating land rights issues. Brhane said that the multiculturalism of Wooster prepared her well to communicate with the 42 staff members underneath her who come from many different countries. “Being able to effectively communicate cross-culturally is an important value I learned at Wooster,” Brhane said. “I had that in my own background, but I think a Wooster education put a framework to it.”
Brhane is particularly passionate about assisting countries that face conflict through her position at the World Bank. She was based in Palestine for four years, where she worked to “bring support and meaningful assistance to help mitigate the worst impacts of the conflict.” Recently, Brhane’s department has been providing financial assistance to Somalia, which is struggling with the coronavirus pandemic on top of multiple other crises. “They had a drought, flood, locust infestation, and COVID in the space of four months,” she explained. “My team developed a program to help them respond to that. I’m really proud of those types of interventions when we find ways of supporting the people who are the most vulnerable.”