AMERICAN DRAGON: A Story of an Asian American Woman Finding Her Way Home 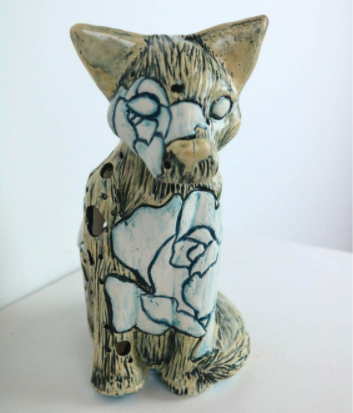 Name: Hannah Jun Langer
Major: English, Studio Art
Minor: History
Advisors: Thomas Prendergast and Cassidy Ely
AMERICAN DRAGON: A Story of an Asian American Woman Finding Her Way Home
Hannah Jun Langer, formerly known as Hong Dongjun
As an Asian American woman born in Anhui Province, China, and adopted into a white family I have a unique perspective that I explore through my artwork. Being adopted separated me from my roots as I was raised in a completely different culture; thus, it has become something within my adult life that I have desperately looked toward. Unlike other artists who define themselves as Asian American, I am looking backward at my Asian heritage, experienced largely second-hand through books, movies, and discussions.
Through this body of work, I fuse the cultures I was born into and the one I grew up in by deconstructing and reimagining blue and white ceramic wares. I am particularly interested in the Chinese history of porcelain created in the Ming period created for a European market and distributed throughout Europe as luxury goods. Like these I was formed in one place but have been distinctly influenced by Western customs and ideas. Even though I am Chinese it does not mean that I know all the heritage or follow all the stereotypes that people associate with being Chinese. Creating multiples explores the complexity of identity and describes different layers that people form within themselves as each piece does not perfectly mirror another one. I juxtapose symbols like the peony flower to represent my connection to my cultural heritage as it is the national flower of China, with textures that represent both corals and other ocean forms to connect with growing up in a coastal town. As we grow up, everyone struggles to find out more about their own identity; however, it is only through this struggle that we are able to truly grow.