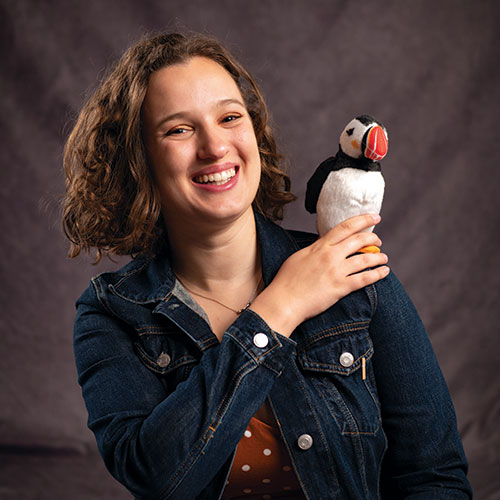 “I met a grandfather who climbed over a 6-foot-tall fence to rescue a puffin. It’s not that they devote their lives to these birds, but they can’t imagine doing anything other than helping them. It’s a deep joy.”

I.S. title: Puffins, the Charismatic Clowns of the Sea: Examining the relationship between community identity and the social construction of animals

When you love animals as a child, people often say “You should be a veterinarian when you grow up.” Megan Tuennerman ’22 heard this a lot, except she had no interest in that path. After taking Introduction to Sociology with Thomas Tierney, professor of sociology and anthropology at The College of Wooster, she chose to study people, not animals. That is, until her philanthropy internship with the National Aviary in Pittsburgh. While fundraising for a cause she deeply cared about, she quickly realized she was jealous of the people working with the birds. “That’s when I figured out that I could work with the birds, too,” recalled Tuennerman.

Around the same time, Wooster launched its new environmental studies major. Tuennerman added the major to her plate and has incorporated animals and conservation into each experiential learning opportunity she secured afterward. First, she worked as the assistant launch director for a nonprofit called One Blue Ocean, where she collaborated with underwater photographers. The experience led her to pursue a scuba diving certification through Wooster—something she insisted had become an important part of her resume. Then, for her first hands-on experience with animals, she received an APEX Fellowship to work as a caretaker at the Pittsburgh Zoo. While studying abroad in Iceland, Tuennerman finally connected her academics and passions in a junior Independent Study project about people, birds, and the environment. At Heimaey Island (pronounced “hay may”), she discovered how children and other community members rescue baby puffins who are confused about how to get out to sea.

“Pufflings are attracted to light coming from town and will come in when they’re supposed to fly out,” said Tuennerman. “They can get hit by cars or eaten by cats when they land, so the locals collect them and basically throw them into the ocean the next morning.”

She completed a 20-page report but knew there was more work to be done around the relationship between the humans and animals. She reached out to Tierney and Heather Fitz Gibbon, professor of sociology and anthropology and chair of urban studies, for permission to expand the project into a senior I.S., and to obtain the necessary Human Subject Research Committee approvals.

“The professors had multiple Zoom calls with me in Iceland even though I wasn’t technically their student at that time,” said Tuennerman. “They supported and encouraged me, and Professor Fitz Gibbon became my project mentor.”

Tuennerman’s qualitative research included observations and interviews of community members in Heimaey. It also led her to Witless Bay, Newfoundland in Canada to visit the only other large colony of puffins that live near a human community. On that second trip, she observed “interesting differences” in conservation methods and the community because the puffins aren’t as physically close to that bay. “This comparative nature and hands-on way of looking at communities makes my project unique,” boasts Tuennerman. The Copeland Fund for Independent Study agreed this was unique and covered the costs of Tuennerman’s travel and housing for the Canadian trip.

Fitz Gibbon praised the study for providing an interdisciplinary perspective that overcomes many of the limitations of earlier animal studies in sociology. “As Megan argues, the classical and early literature in the field looks to identify how humans are different, if not superior, to animals,” said Fitz Gibbon. “Megan looks instead at how our relationships with animals are closely tied to our culture and social structure.”

Tuennerman says it’s beneficial for the world to see there are different versions of conservation in other cultures that are equally important. In the U.S. we often separate humans and nature with a fortress conservation style, but the Heimaey people’s complete opposite approach to dealing with puffin nesting grounds all over their small island clearly benefits more than the birds alone.

“I met a grandfather who climbed over a 6-foot-tall fence to rescue a puffin,” recalled Tuennerman. “It’s not that they devote their lives to these birds, but they can’t imagine doing anything other than helping them. It’s a deep joy.”

Unsurprisingly, Tuennerman is already helping birds herself. A week after graduation, she started working as an aviculturist at the Monterey Bay Aquarium in California. She also looks forward to the possibility of working in conservation administration one day.