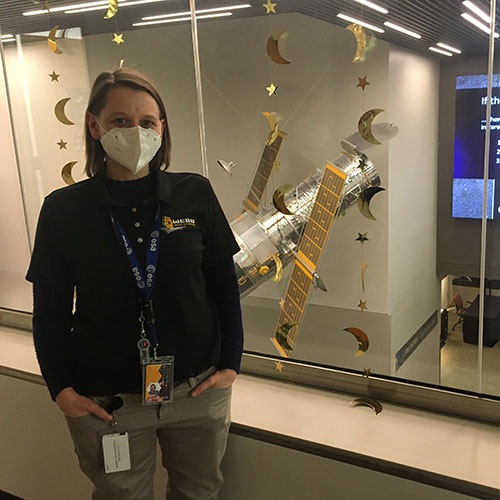 Kirsten Larson ’08 knew that she wanted to study science and do research. When attending The College of Wooster, she chose to major in physics and, through student research and her Independent Study, she discovered her passion in astronomy.

“During my first summer at Wooster, my research experience for undergraduates (REU) was a project in astronomy, and that’s when I really started becoming excited about it,” Larson said.

Her education both inside and outside of the classroom at the College led her to her current role as an astronomer on the world’s most advanced scientific observatory—the James Webb Space Telescope.

At the Space Telescope Science Institute in Baltimore, she is focused on the mid-infrared instrument (MIRI) on the Webb Telescope. One of four science instruments on the telescope, MIRI collects images from star formations, distant galaxies, and planets beyond our solar system, and then scientists process the data. Much like people today are fascinated with images from the Webb Telescope, Larson said that when she was younger, she was enamored with and dreamed of someday working on the Hubble Telescope. She had no idea that something as complex as the Webb Telescope would be around now. 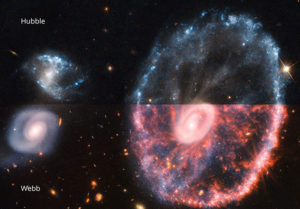 Larson explained that having a MIRI allows researchers to see what was previously hidden in space. Webb can probe for signs of life beyond the solar system and look into distant planetary atmospheres for oxygen and water.

“When you see these beautiful images from the Webb Telescope with all of these features lit up,” said Larson, “that’s where MIRI literally allows us to see the physics and the dynamics of what’s going on.”

Looking back, her senior Independent Study at Wooster, titled “An Optical Study of the Infrared/Radio Correlation of Galaxies,” was an obvious precursor to her current profession. Having started the research with the University of Hawai’i as a research for undergraduates experience funded through the National Science Foundation, she was able to transition it to her I.S., which provided valuable experience collaborating with disparate teams spanning multiple institutions and developing communications skills to convey ideas to a lot of different people.

“I.S. didn’t just teach the technical skills. Since it had the emphasis of learning and doing the research, it taught problem-solving skills,” Larson explained. “I learned how to be creative and work through problems when things go wrong; and things will go wrong in the day-to-day work you do in research. This was an important base for a lot of things I would experience in the future.” She added, “When you’re working with the Webb Telescope, which is in space a million and a half miles away, if something goes wrong, you can’t just go out and fix it. It’s important to get creative, work around the issues, and solve problems.”

Living in an international residence hall in her first year at the College, Larson became involved on the South Asian Committee and subsequently made friends with a diverse group of people. She was also involved in Wooster Christian Fellowship and served as secretary of the Society of Physics Students. 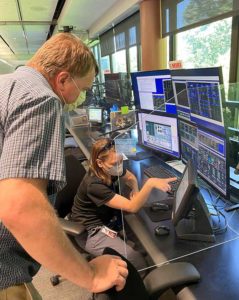 “It was really nice to have the experience early on meeting people from all over the world,” she explained. It was yet another Wooster experience that now aids Larson in her career. While independent research factors largely into her job, it also requires significant teamwork involving scientists and engineers near and far. The Webb Telescope is an international collaborative partnership between NASA, the European Space Agency, and the Canadian Space Agency.

“I get to be a part of this team that works with astronomers all over the world. We all have to work together to make it happen. My time at Wooster really set me up well and gave me a good foundation for working with others,” Larson said. “It has really benefited me in ways that I could never have foreseen at the time.”

Photos: Larson’s current work at the Space Telescope Science Institute in Baltimore is focused on the mid-infrared instrument (MIRI) on the Webb Telescope.

The second image above compares a photo from the Hubble Telescope and the Webb Telescope. Image courtesy of webb.nasa.gov. More information available at the link.