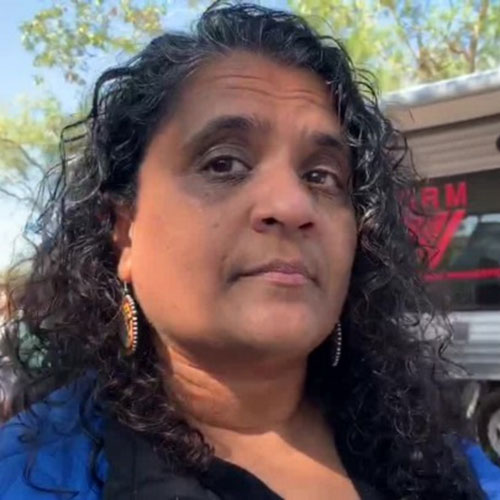 When she first came to The College of Wooster, Charlene D’Cruz ’89 had no idea she would become an attorney, but now she works at the U.S.-Mexico border representing refugees who are stranded and seeking asylum.

Originally from India, D’Cruz came to Wooster as an international student with a plan to study computer science. At first, she took classes in physics, chemistry, computer science, and math, but it was the non-science classes she had to take that had the greatest impact on her. She changed her plans completely and graduated with a major in Spanish, a language she did not speak when she first arrived at the College, and a minor in mathematics.

Even the classes that she hated at first majorly influenced her life and career. She especially disliked a public speaking class. “I used to hate talking in front of people,” said D’Cruz. “I absolutely hated the class during the first three weeks.” But the skills she learned in that class were vital in her later career as a litigator.

After graduating from Wooster, D’Cruz moved to Arizona to help start and run The Florence Project, a project which provides legal aid to Central American refugees held by the U.S. government. The project still exists today and has only expanded in the 33 years since D’Cruz helped start it.

No lawyers worked on the project when she worked there, so it was up to her to help represent Central American refugees at immigration hearings. Although difficult, her work in immigration law and human rights led to her interest in attending law school and becoming an attorney. She attended the University of Minnesota Law School, where she received her Juris Doctor in 1994.

After law school, D’Cruz continued her work with nonprofit legal organizations, litigating in the areas of housing law, discrimination, special education, immigration, and consumer law. Her interest in the rights of children with disabilities led her to get a master’s degree in educational psychology in 1999 also at University of Minnesota. After starting an immigration law practice out of her home, she travelled to Greece to help refugees from the Middle East and Africa and worked at the U.S.-Mexico border, fighting against family separation and unjust treatment of refugees

D’Cruz’s ability to take chances and form connections at Wooster helped her achieve her goals both in college and in her career. As a student, after only four months of Spanish classes, she decided to take a chance and study abroad in Spain her sophomore year. When she came back to the United States, she was fluent in Spanish, a skill that would prove to be priceless in her career as an immigration attorney.

In 2019, she founded a legal project in Matamoros, Mexico, where she gives free legal services to refugees stuck at the border, many of whom “are coming in because they’re facing intensely dangerous situations,” she explained. She works with these immigrants to “seek an exemption for them to come into the United States based on their vulnerability and to seek asylum.”

D’Cruz honed the skills she needed to work with these diverse groups of people from her time at Wooster. As an international student, she first had to get used to life in the United States and found community with other international students on campus. Even though D’Cruz and the other students did not share a home country, they bonded over their shared experiences.

“There are many experiences in Wooster beyond the academics that shaped me,” she said. “The strength of Wooster lies in its community.”