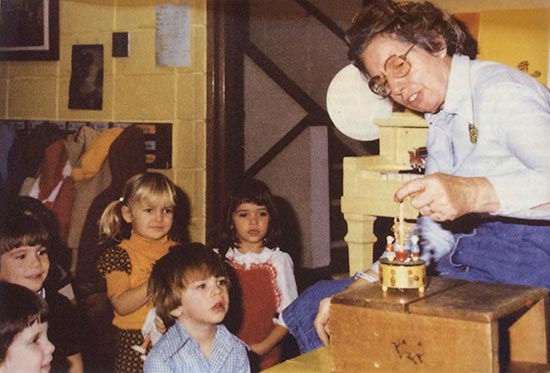 The College of Wooster Nursery School is fully licensed by the Ohio Department of Job and Family Services and has been in continuous operation since 1947. Jean Bates, wife of the minister of Westminster Presbyterian Church, conceived of the idea and the school began with the support of the Junior Women’s Club. Mrs. Bates, who held a master’s degree in early childhood education, started the nursery school in the basement of the old Memorial Chapel. In 1966, upon the completion of Westminster Church House, the nursery school moved to its current location.

Esther B. Young followed Jean Bates. In 1956 Clare Adel Schreiber became teacher and director. She introduced a program with play as its cornerstone. Play, a child’s innate curiosity about the natural world, and Mrs. Schreiber’s love and knowledge of nature, have provided the basis for the nursery school’s curriculum ever since. Mrs. Schreiber retired in 1985 but remained active as a consultant until her death in 2011.

Affiliation with the College of Wooster

In 1974 The College of Wooster fully incorporated the nursery school into its program. The nursery school offers over 100 students each year practical experience in the early childhood classroom, through psychology class placements, I.S. (Independent Study) guidance, and employment opportunities. The energy and perspective of the college students enrich the program in myriad ways. Affiliation with the college also enhances the nursery school program through partnerships with several academic departments. In the past, the children have visited the tree lab and learned about dinosaurs with geology faculty, viewed exhibits at the art museum, and been invited to learn about bees with biology professors.

In the years since Mrs. Schreiber’s directorship, the nursery school has been fortunate to have several talented and dedicated directors to carry on her legacy. Their energy, passion, imagination, and love of children and nature made a lasting impression. Both the preschool children and the psychology students observing in the classroom have benefitted from their wisdom, patience, and guidance. They are:

The nursery school teachers have presented the school’s unique nature-based curriculum at statewide and national early childhood educators’ conferences. Most recently, in 2012, they led a workshop at the Ohio Early Care and Education Conference entitled “Green Grow the Children: Nature Discovery for Everyone,” which offered hands-on ways to introduce nature study into the early-childhood classroom.

In 2014, the nursery school was named a WILD School Site by the Ohio Division of Wildlife. To achieve this distinction, the school demonstrated that the efforts of teachers, students and the school community benefitted wildlife through habitat improvement projects accomplished on the school grounds. The school grounds have also been certified a monarch waystation by Monarch Watch and observing the monarch lifecycle has become an integral part of the school’s fall nature curriculum.

The nursery school celebrated its 75th anniversary in 2022!