WOOSTER, Ohio — In their ongoing search for clues about the evolution of life, paleontologists often turn to tiny markings buried in ancient sand and mud or embedded in rocks and fossil shells. 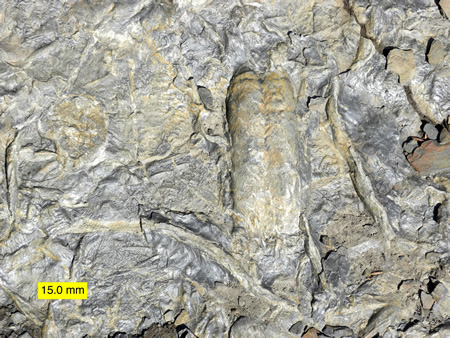 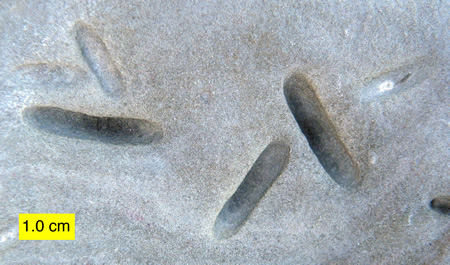 One of those paleontologists, Mark Wilson, a professor of geology at The College of Wooster, has spent more than a quarter century in the pursuit of these markings, known as trace fossils (evidence of organism behavior, such as footprints, tracks, burrows, borings, etc.) in soft substrates like mud and hard substrates like rocks and shells. Wilson’s research has produced significant findings over the years, most recently new information about two prodigious evolutionary events that shaped the marine biosphere — the Cambrian Explosion (CE) and the Great Ordovician Biodiversification Event (GOBE) — published this week in the highly regarded journal, Proceedings of the National Academy of Sciences.

Body fossils suggest that the great majority of organism types (termed phyla) emerged during the Cambrian, while large increases in numbers of species within those phyla took place during the Ordovician. Likewise, trace fossils show an explosive diversification during the early Cambrian and more continuous diversification during the Ordovician. The question scientists have pondered for decades is whether the CE and GOBE were independent or whether the latter was an extension of the former.

Wilson, and fellow paleontologists Luis Buatois (senior author), Gabriela Mángano, and Ricardo Olea, were interested in documenting the contrasting trace-fossil diversity and disparity trajectories in soft and hard substrate communities during these two evolutionary events and to identify the possible underlying causes.

What they found was that soft substrate trace fossil communities diversified more quickly than those in hard substrates, leading the authors to conclude that the process of evolution in these two communities was “decoupled,” or separate.

According to Wilson and his fellow researchers, an increase in the diversity of trace fossils in soft substrates (or sediments) at the beginning of the Cambrian period approximately 540 million years ago occurred earlier than the rapid diversification indicated by hard substrate fossils.

“This increase in diversity was accompanied by an increase in the disparity of trace fossil architectural designs,” say the researchers. “The diversity and architectural disparity of trace fossils in hard substrates remained low throughout the Cambrian period, but rapid increases followed during the GOBE, approximately 80 million years after the diversification of soft substrate fossils.”

The decoupled evolution between hard and soft substrate communities likely occurred because of an increase in hard substrate availability during the Ordovician, a rise in predators forcing animals into the substrates, and the higher energetic requirements for boring in hard substrates compared to burrowing in loose sediments, according to the authors.

“This is very exciting because it summarizes the research we have been doing for more than 25 years,” says Wilson. “It puts our work into an evolutionary context by revealing new patterns of radiation and diversification of marine communities during two of life’s most important evolutionary events”.

The journal article can be accessed at the Proceedings of the National Academy of Sciences  website.