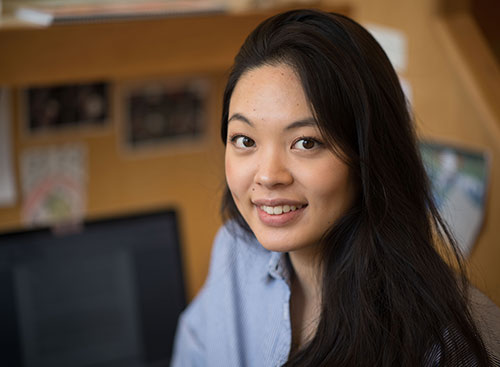 Meg Itoh, a Chinese and communication studies major at Wooster, spent the fall semester of her junior year in a Mandarin language-immersion program at Peking University in Beijing, during which she was able to travel to Sichuan, Chengdu, Guilin, and other parts of the country as well. “Having the opportunity to try different regional cuisines opened my eyes to the food culture of China,” she said, “and opened my mind to thinking of food beyond something we simply consume every day.”

Back in Wooster for the spring semester, she happened to go out with a friend to a local Asian restaurant, and the contrast was striking. It was the kind of place that offers not just a meal, but an “experience” with food prepared by cooks who provide a running commentary as they toss knives in the air and squirt sake into diners’ mouths.

“It felt not just like a performance, but a circus act,” Meg said. She began to think about the place of Chinese food in America, its common perception as a fast, easy, cheap takeout alternative, and whether that perception reinforces a devaluation of Chinese labor in the U.S. How, she wondered, did Chinese restaurant workers, many of them immigrants, craft their identities in a new land through the food they prepare and serve? The seed of an I.S. was planted.

She knew that the food served in most Chinese restaurants in the U.S. is heavily Americanized: blander and less spicy, with more fat, salt, and sugar than traditional Chinese cooking. Did having to cater to American tastes, rather than serving more authentic dishes, feel to those restaurant workers like a weakening of their Chinese identity?

“My assumption going in was that they would see both themselves and their food as undervalued in the American restaurant industry,” Meg said. To test that assumption, she arranged interviews with seven workers at four restaurants: three in Cleveland, one in Columbus. Six had immigrated to the U.S. with their families as children, one was born here.

She discovered a reality that was more complex than her initial assumptions, starting with the fact that every restaurant had two menus: the standard one filled with Americanized dishes, and a second for their Chinese patrons (or anyone else who knew to ask for it) with more authentic options. You might find the same item – kung pao chicken, for example – on both menus, but prepared using two very different recipes.

“Chinese menus for Chinese customers is a mode through which restaurants maintain their cultural identity in the United States,” Meg observed, while still catering to the American palate on the public menu in order to succeed commercially.  And while those she interviewed said their parents had faced discrimination, and perceived their own labor as being devalued because of where they worked, they saw both the perception of, and appetite for, Chinese food in America changing. They discussed how their customers are more open to trying new things – including suggestions from the Chinese menu – and took pride in the fact that more authentic Chinese food, as well as various Asian fusion cuisine, is selling now among a wider clientele. “It’s on the rise,” one restaurant worker told her. “You’ll see more and more places selling that, and able to charge higher prices.”

Meg recorded all her interviews, along with b-roll of the restaurant interiors and the foods she ordered, including side-by-side comparisons of the same dish from the two menus, with a Canon DSLR checked out from the college’s IT department, and is editing a short film to accompany her written I.S.

“I want to give a voice and a face to these historically marginalized people,” she said. “Emphasizing their individual stories and experiences is crucial to my I.S.”

Posted in Independent Study on September 19, 2018.