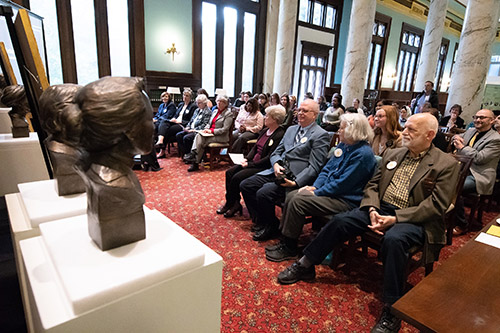 WOOSTER, Ohio – Six new displays in Timken Science Library will serve as enduring inspiration for College of Wooster students, as they can look up from their study carrels and view images and names of scientists from historically underrepresented groups. The four busts and two portraits were revealed Wednesday during a ceremony that included remarks from President Sarah Bolton and Beverly Cain, the state librarian of Ohio.

The six “Hidden Science Superstars” are:

A year-in-the-making, the “Hidden Science Superstars” idea was conceived by Irene Herold, librarian of the College, with the goal being “to make a commitment to celebrate the rich diversity of scientists that weren’t currently represented in the building.” Nominations were first solicited from across campus, then after 40-plus nominees were narrowed to 12 finalists, the honorees were selected via campus-wide vote.
The project may not have been possible without the Library Services and Technology Act, the funding of which is administered by the state library of Ohio, as well as a gift from Wooster’s former director of libraries Damon Hickey and his wife Mary, which allowed for two additional honorees, instead of the original four. “We were very happy with the grant proposal and that we were able to support this wonderful program. It’s now very rewarding to be back, to see the result of this tremendous work that really involved the entire campus,” commented Cain.
Bolton asserted this project is especially appropriate for Wooster. “I’m really delighted that the College has undertaken this. What we’re doing here really is broadening our iconography, thinking about what is the wide range of inspiring stories of discovery that can dwell among us here,” she remarked and also noted that one of the College’s founding premises was “everyone should be welcome in (this) community of learners on equal terms,” which was a radical statement in 1866.
The four busts of Chase, Franklin, Sina, and Wu will be permanently secured atop the bookcases of the Timken Science Library reading room, while Jemison’s and Mirzakhami‘s portraits will be displayed in the stairway leading up to the reading room.
For more information, visit libguides.wooster.edu/science-superstars.