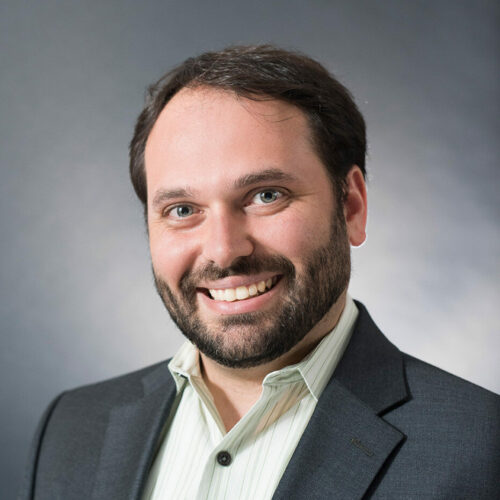 When Shawn Sweeney ’06 found out that the well-known animal behavior expert and conservationist Jane Goodall, Ph.D. who has done groundbreaking research on chimpanzees and advocated for environmentalism for 60 years, was coming to give a lecture on campus in 2004, he did everything he could do to be involved. “I ended up being a student ambassador for her visit and coordinating the volunteers for her lecture and book signing,” Sweeney remembered. At the time of Goodall’s visit, Sweeney was a double major in biology and psychology, interested in animal behavior, and set on studying primates in the wild. “I actually went and met her at the airport when she arrived, and I told her that if she had a job for me, I would quit school and start working for her,” he said.
Goodall sagely advised Sweeney to finish his degree and suggested that in the meantime he could get involved with the Jane Goodall Institute’s youth program Roots & Shoots which empowers young people to become compassionate citizens for people, animals, and the environment they share. Sweeney founded The College of Wooster Roots & Shoots group which held talks on environmental issues and advocated for sustainability on campus. Though the group no longer exists at the College, there are still multiple environmental student groups working towards similar goals. “Even if the group doesn’t live on necessarily, the sort of institutionalization of some of the ethics and mindset that we were hoping for is there, and hopefully permanently,” Sweeney said.
After being exposed to Goodall’s environmental messages, Sweeney’s academic interests began to shift towards conservation psychology. He started working with Susan Clayton, a professor of psychology who became his senior Independent Study advisor. Sweeney held internships at the Cleveland Zoo through Clayton and his I.S. looked at the conservation attitudes of zoo-goers. His previous research on animal behavior, however, still helped him when he shifted his focus. “It was cool to have done all this work with animals and to understand wildlife because it gave me a lot of motivation moving forward to conservation psychology,” Sweeney said.
Sweeney appreciated how being at Wooster made it possible for him to shift his academic interests. “That’s one of the beauties of going to a school like Wooster just because there’s a really big sandbox to play in, and it’s not hard to make those pivots,” he reflected.
Clayton was one of many female mentors during Sweeney’s time at Wooster who left a significant impression on him. “I’ve benefited from, by and large, female mentors and that’s certainly the case with Wooster. There were always very strong supportive women,” he said. At the time of Goodall’s lecture, Sweeney had been working with then Dean of Faculty Shila Garg, who helped him to get involved with the event. And his academic work with Clayton, in addition to Claudia Thompson and Amy Jo Stavnezer in psychology, and Sharon Lynn in biology and neuroscience, helped him develop his interests in animal behavior and conservation psychology that made him so committed to Goodall’s mission, a mission he has worked for ever since the famous conservationist came to speak on campus.
After graduating from Wooster, Sweeney achieved his goal of working for the Jane Goodall Institute. He started as a graduate fellow, then stepped into a role on the Roots & Shoots team, and finally moved to communications in 2014, where he has been working ever since. Sweeney’s current position as associate vice president of communications is a multifaceted role that requires him to draw on many of the skills he learned at Wooster. “I’ve come to be regarded as a kind of  Swiss army knife in many ways,” Sweeney remarked, saying that his job includes a broad range of tasks including doing community engagement, marketing, storytelling, press and media, talking with partners, influencers and policymakers, as well as supporting programs, including in African countries where the Jane Goodall Institute works across the chimpanzee range. Sweeney said that it was from Wooster and in particular working on I.S. that he gained “a really intense commitment to high quality writing and encouraging the same level of excellence with my team.” Sweeney’s female mentors from Wooster and in his career helped him get to the place he is at now. “I feel more strongly than ever from working for Jane and doing the work that we do that recognizing the impacts of women is of utmost importance, and I very much thank and appreciate the people who have ingrained this ideology in me” he said.