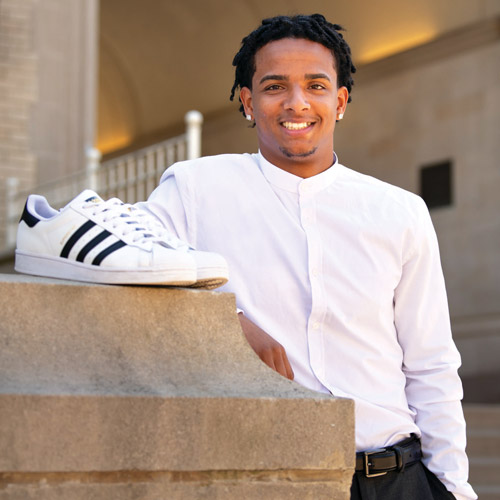 “Business literature seems to highlight all the obstacles that Black entrepreneurs experienced through history rather than the accomplishments and positive influences they’ve had both in the Black community and abroad. I wanted to explore why that is.”

I.S. title: Exploring the Black Entrepreneur in America: The relationship between Black business and society

Living and breathing the game of basketball on a top-10 high school team gave Khaylen Mahdi ’22 the dream of playing at the Division I college level. When those plans didn’t pan out, his counselor recommended a highly ranked liberal arts college with a solid basketball program: The College of Wooster. Mahdi was pleasantly surprised to find a “vibrant and supportive community” at Wooster—both on and off the court.

“The idea of attending college in a small town was not the plan, but it worked out better than I could have imagined,” said Mahdi. He quickly began benefitting from close relationships with professors thanks to the small class sizes, and after winter break his first year, he was playing more than 30 minutes a game on varsity.

Growing up in his dad’s barber shop in Amherst, Massachusetts, Mahdi witnessed the 40-year veteran barber’s entrepreneurial mindset and was inspired to take a similar path. He met with Peter Abramo, director of entrepreneurship at Wooster, and decided to self-design his own entrepreneurial studies major.

Through some of his coursework, Mahdi recognized that a lot of literature is more negative toward Black entrepreneurship. “It seems to highlight all the obstacles that Black entrepreneurs experienced through history rather than the accomplishments and positive influences they’ve had both in the Black community and abroad,” said Mahdi. “I wanted to explore why that is.”

Mahdi used his Independent Study to shine a light on Black entrepreneurship as a means for economic and cultural growth. He was surprised to discover contradictory statistics from The Network Journal that said eight out of 10 Black-owned businesses fail in the first 18 months, while another said these businesses produce more than $1 billion each day in revenue.

Joe Histen, assistant professor of economics, who served as one of Mahdi’s mentors said, “I.S. is all about making sense of an unstructured and complicated world. Khaylen asked big questions and was competent enough to answer them.” His other mentor, Abramo, added this: “Khaylen completed his I.S. with determination and a systematic approach. His discipline as a student-athlete really shined during the process.”

The research also features interviews of Black entrepreneurs like a personal chef of professional athletes who said starting his own business wasn’t a choice for him—it was a necessity. “I learned that there are far too many limitations put on Black individuals in the corporate world,” said Mahdi. “As an entrepreneur, you’re able to take control of your time, freedom, and ultimately your life.”

He didn’t realize it at the time, but Mahdi took control like this back in his first semester after he had to find a ride an hour away from campus just to get a haircut. He realized other students of color didn’t have a barber shop to go to in the predominantly white community of Wooster either. It motivated him to spend spring break studying his dad’s trade, and later start a makeshift barber shop out of his dorm.

As for I.S., Mahdi concluded that a large problem for Black entrepreneurs in particular is access to education and capital. His report offers suggestions for how young entrepreneurs can engage in mentorship, education, financial literacy, and find other resources, to help avoid adversities.

The student-athlete personally benefited from similar resources at APEX, Wooster’s Center for Advising, Planning, and Experiential Learning, where he gained interview skills and set up a personal brand before applying for internships. His hard work paid off when he landed a highly competitive role with global footwear brand, Adidas.

Aside from a two-week visit to the Portland headquarters, Mahdi spent the mostly remote summer 2021 internship in corporate finance crafting Excel forecasts for the company’s wholesale and retail teams. His reporting helped the teams determine when to renovate specific stores, and plan for product inventory in two sporting goods chains across the country. Last October, he accepted a full-time job offer from Adidas and started working with the company’s Yeezy team in Los Angeles on May 30.

As for his entrepreneurial future as a barber, Mahdi doesn’t want to open his own shop. “I definitely want to keep the craft alive and plan to cut for friends and colleagues out in L.A.,” said Mahdi. “I also think it’d be so cool to cut my kids’ hair one day.”

Identify opportunities and solutions that have value, then communicate that value to others