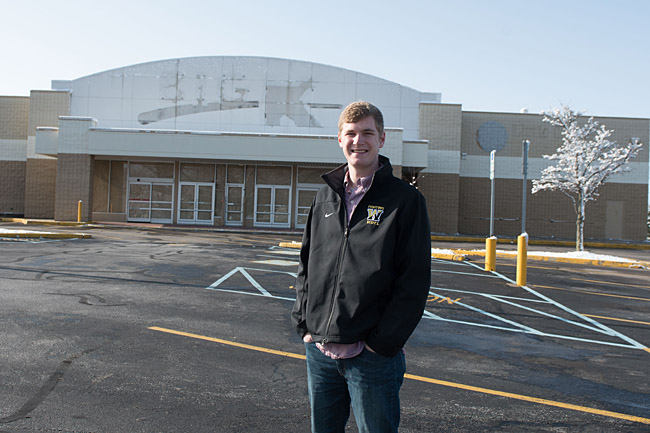 Notice the empty storefronts popping up more and more frequently at your local mall or entire plazas becoming vacant? Business economics major Jack Marousek has, and he came up with a reasonable hypothesis to explain this trend: “e-commerce is reducing the demand for brick and mortar stores, which increases market area and reduces the number of shopping centers.”
Consumers, with just a few clicks or swipes on any device, can purchase most any good within the comfort of their home, and with the advent of localized distribution centers, Amazon and others can even deliver said purchase within hours to their doorstep. Thus, it’s plausible to assume that these e-retailers are making a significant impact on the traditional way of shopping.
What Marousek—an executive board member of the College’s Jenny Investment Club and four-year letter-winner with the Fighting Scots’ football team—found in his research actually suggests slowing down that thought process. Following a study of economic literature on a similar topic from 20 years ago—Walmart’s impact on “mom and pop” stores—he developed models, utilizing market area theory and threshold theory. These equations, for example, help determine how the small city of Wooster can support three Subways, Marousek explained. “It starts to make sense when you look at this theory and how it’s applied in the real world,” he said.
Marousek’s models, which focused on the Cleveland and Akron metropolitan areas, attempted to determine if e-commerce became a significant influencer of retail real estate, in terms of “how many stores should be in a zip code as a function of the population and demand,” two variables traditionally used to make those decisions. Surprisingly, the models, which tested whether the variables were less effective in explaining retail presence in 2015 than in 2012, did not reveal a “significant difference.”
While Marousek believes retailers are rethinking their strategies to incorporate technology, there remains a strong desire from enough consumers to make in-person purchases. “Ultimately, the result of my study is good news for physical real estate, as it doesn’t provide evidence that e-commerce is having an adverse effect,” he summed up.
Not yet anyways. One factor that Marousek warns very well may have affected the outcome was the available data, as his models were only able to compare 2012 and 2015 statistics from the U.S. census, and he thinks “this project would be way easier five years from now. Many of the problems with physical real estate have just recently come to the forefront.”
Marousek will likely be on the frontline of this developing topic. As an intern in real estate commercial lending at Key Bank in Dallas the summer before his senior year, he got a first-hand account of how such difficult decisions are made. “The banks hesitate to lend towards retail real estate. It’s really tough to tell who’s going to succeed with competition from e-commerce,” he said. Impressed by his work during the internship, Key Bank offered Marousek an opportunity to begin in its management training program after graduating from Wooster.
[A version of this story first appeared in the Spring 2018 issue of Wooster magazine.]

Shedding light on the impact of Covid-19 on mental health