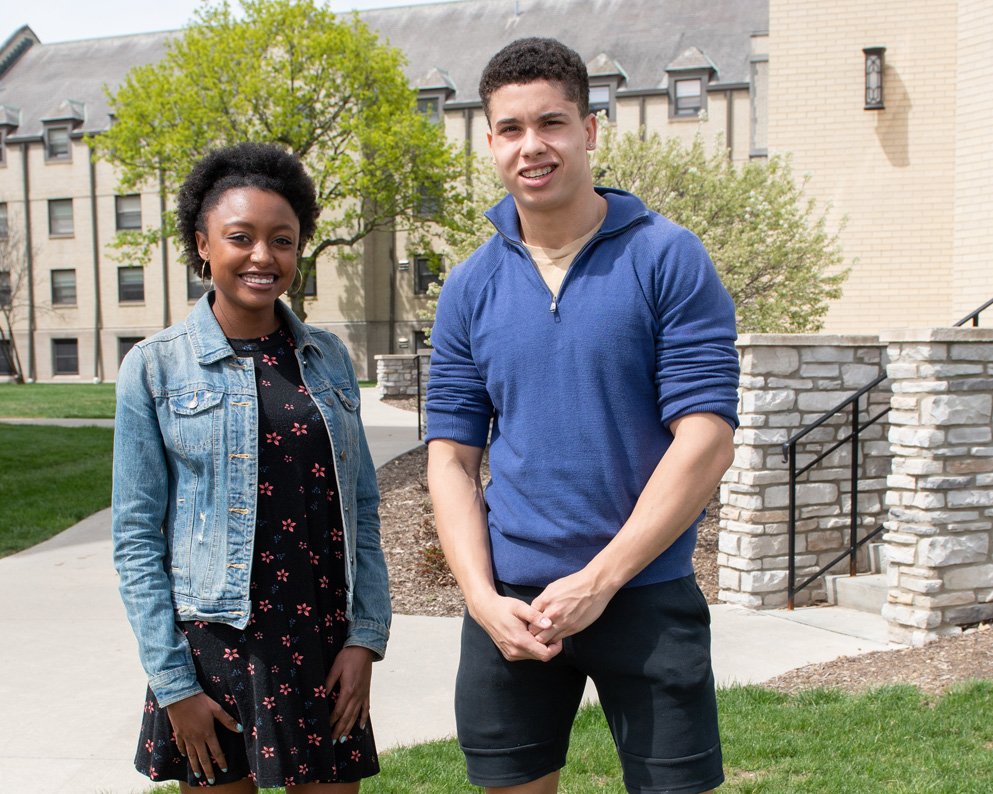 WOOSTER, Ohio – The postgraduate plans of College of Wooster seniors Emani Kelley and Burke Poeting are finalized, each having been awarded an English Teaching Assistantship (ETA) from the prestigious Fulbright U.S. Student Program. Kelley’s ETA will be served in Spain and Poeting’s in Germany.
Wooster’s impressive number of Fulbright winners now stands at 33 since 2000.
Kelley, who has been speaking Spanish since kindergarten, was enrolled in a dual-language immersion program while growing up in a coastal town in southern California, and studied abroad in Chile, looks forward to utilizing her bilingual skills at a university in Spain with campuses in Madrid and Segovia. She expects to work at a writing center there and is excited about the prospect of “working with not only Spaniards, but a variety of Europeans with varying ability … to help them master the English language,” while also assisting with other class projects.
The Fulbright program is “something that appeals” to the well-rounded Kelley, a psychology major with dual minors in Spanish and Latin American studies, an all-conference standout and captain of the cross country and track & field teams, and president of the Alpha Gamma Phi sorority. She anticipates the experience will serve as good preparation for her next step, likely graduate school for public health and eventually a career at a clinic or hospital.
Poeting, from Pittsburgh, was also exposed to a second language at a young age (his dad is a native of Germany), and later acquired basic fluency, thanks in part to an “incredibly great” study abroad experience in Freiburg, Germany, while majoring in German studies at Wooster (also a history minor). His ETA will take him to northwestern Germany, and though his duties have not been assigned yet, he is eager to serve as a “cultural ambassador” in addition to teaching English.
Poeting, a four-year varsity letterwinner in swimming for the Fighting Scots, feels strongly that the Fulbright award will be beneficial because “teaching is a very transitional skill … it can only be a nourishing and enriching experience.” With interests in politics, international relations, business, and economics, Poeting’s future will probably include graduate school, and he noted that possessing the German language skill and cultural understanding will be an asset when it’s time to job search because “Germany is an incredibly powerful world market.”
The Fulbright U.S. Student Program is the largest U.S. exchange program and offers research, study, and teaching opportunities in over 140 countries for students and young professionals. Sponsored by the federal government, the program was established in 1946 in an effort to increase mutual understanding between the people of the U.S. and citizens of other countries. Students are chosen on the basis of academic merit and leadership potential. They are then given the opportunity to study, teach, conduct research, share ideas, and contribute to finding solutions to shared international concerns.