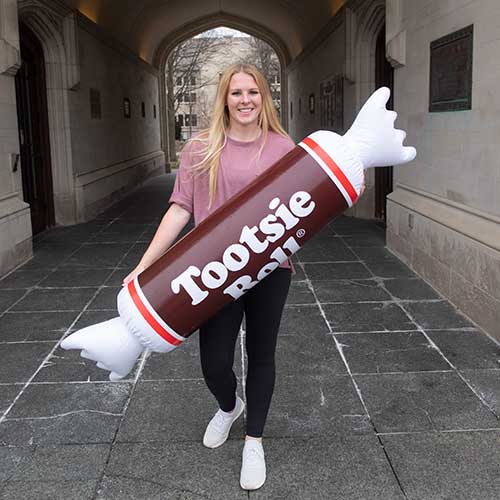 Combining biology and religious studies, two fields that would seem to be at odds with each other, into one Independent Study project as a double major is a challenge Kelsey Stone ’21 began anticipating in her first year at The College of Wooster. With an interest in Buddhism and East Asian Studies, Stone began talking with Mark Graham, associate professor religious studies. She knew she didn’t want to do a biology lab study, and as a defender on the women’s soccer team with an interest in physical therapy, she wanted to look at the nutrition and fitness aspects of biology. “I wanted my project to be driven by me,” said Stone, explaining that she designed a project looking at the diets of two “highly specialized elite groups,” specifically Buddhist monks and Olympic pentathletes, and how what they consume “affects their progress toward success and each group’s definition of success.”

Working with Graham, as well as Bhakti Mamtora, assistant professor of religious studies and South Asian studies, and Nick Brandley, assistant professor of biology, Stone intended to arrange visits with the two groups where she could learn more about their diets and activities. “Seeing how they trained, the level of intensity, is really hard to display over a phone call,” said Stone, explaining that she wanted to be able to ask questions inspired by seeing the facility used to train for the Olympic event and the community where the monks lived. When the pandemic limited her ability to travel, she completed the interviews over calls and had the participants share with her menus and pictures of their food. “Kelsey’s project has been very student driven, and as a result I’ve learned a lot,” said Brandley. “Diets and nutrition can be quite variable between groups of people and getting access to these groups has provided us with data that is not normally available.”

“A pentathlete was the ideal matchup to a monk because both their practices take the entire day,” Stone said, explaining that pentathletes train for five different events including fencing, shooting, swimming, riding, and running. “Their entire day is spent recovering and competing, where for monks, their entire day is spent meditating or doing chores. I looked at the physical demands of each of those and how their diets can help or inhibit certain components of their lifestyles.” For example, she explained that iron intake contributed to the success of both groups, “Iron was an important factor relating to muscle soreness. Your body is going to be sore whether you’re training for six hours or sitting in the same position for six hours a day.”

Finding the balance between academic writing in religious studies and biology proved to be one of the most difficult aspects of Stone’s I.S. “Those are not just two different kinds of knowledge, they’re two really different kinds of writing,” said Graham. “To find that point where a very wide range of persons could read it and benefit from it is not an easy thing to do.” Stone often talked with her advisors about what tone of writing to use for different parts of the piece. “Bio is very monotone, straight to the point, and there’s more interpretation to religious writing,” she said, noting that she had to make careful decisions about when to include her opinion. “From our perspective, recognizing the different needs of the disciplines and then finding that middle ground, so that Kelsey’s project had the space it needed to thrive was challenging but also very rewarding,” Mamtora said. “Kelsey’s ability to bring these two disciplines together points to future areas of research in biology, cognitive sciences, religious studies, and environmental sciences, and how those intersections inform our understanding of religion and science.” This spring Stone presented her research at the American Academy of Religion Midwest regional conference, and she is hoping to continue to study the intersections of the two disciplines, particularly religion and physical therapy as a graduate student.

Originally published in the summer 2021 issue of Wooster magazine.